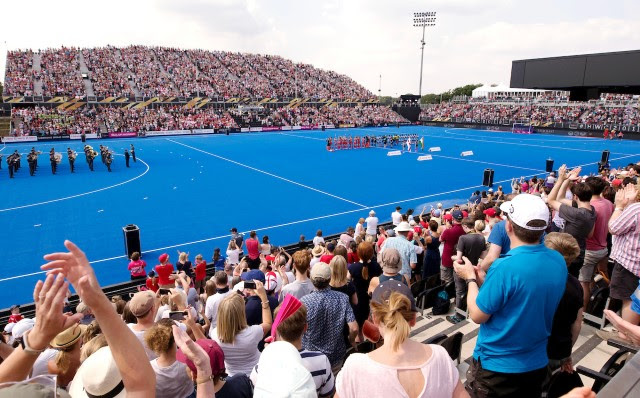 Stoppages and play acting at a World Cup? Pah! Instead we got fast, free-flowing hockey as a fine opening day at the Women’s Hockey World Cup kick started into life at the Olympic Park in front of 10,000 crowds.

Germany had little trouble in sweeping aside South Africa 3-1 in the opener, before the stadium filled to the rafters to watch hosts England salvage a 1-1 draw against a dogged India. A Red Arrows fly past before the match had set pulses running.

The pockets of green then upped the ante as Ireland produced the performance of the day against the USA.

Granted, the United States only managed to get to the ground around 45 minutes before their match thanks to traffic issues.

But world No 16 Ireland’s 3-1 victory was a memorable one, with Deidre Duke on target twice against seventh-ranked US.

In the final match of the day, Jodie Kenny, having returned this year after taking time out to become a mother, scored a sublime drag flick as Australia were made to work to the hooter in beating Japan 3-2.

Is this the youthful World Cup?

There are debutantes galore at this World Cup and a plethora of talent who have stepped up from Junior World Cup level. Rosie Malone may have trumped the lot. Playing in her second international tournament after joining the Hockeyroos squad in May (she was close to becoming a soccer player), Malone opened the scoring in her first appearance at a global tournament. She said: “This amazing crowd excites you. I was ready to go and I was in the right place at the right time. We practice that 1000 times and it paid off, so I’m stoked.”

The build-up to the World Cup had been notable for raising awareness of concussion, due to England pair Shona McCallin and Nicola White missing England’s World Cup squad and time spent on the sidelines in recovery. On day one at Lee Valley, the dangers were in full evidence. Nicolene Terblanche, the South Africa captain, was sent tumbling after being hit on the back of the neck from a rifling reverse stick shot by a German opponent. She was immediately sent down the tunnel to be assessed. Two USA players were also hit flush in the face during their defeat to the Irish, one of whom gave the thumbs’ up to the bench and carried on with no medical attention.

“We had to ride it out as Japan threw everything that they had at us. Yes, we managed to give away those two goals but it could have been worse had it not been for some good defending.”
Australia’s Jodie Kenny

“We had a certain amount of confidence that we could win this game, we had done a lot of homework on USA and we stuck to our plan. And you saw it out there, everyone was giving 100 per cent.”
Ireland forward Anna O’Flanagan

“USA are one of the best pressing teams in the world and they can put you on the back foot with their physicality. But I thought we were magnificent and I’m incredibly proud of the group.”
Ireland coach Graham Shaw

“We dominated possession, we had our corners and we had our chances. If you look at our second half we are really pleased with how we played. It’s fine lines but by no means a disaster.”
England midfielder Susannah Townsend

Charlotte Stapenhorst on what it's like to return to the country she went to school in 🏴󠁧󠁢󠁥󠁮󠁧󠁿 #HWC2018 pic.twitter.com/lKxeBLLq86

Who to watch on Sunday

Seen as the joker of the team, as well as Dutch captain since January. Leading such a high-profile team, she can walk around Amsterdam relatively unnoticed thanks to her trademark bandana she wears on the pitch.

The female world player of the year oversees a talented squad, with an average of 25. Eight of them featured at the 2016 junior World Cup and Merino will want this team to blossom after Argentina finished seventh at the Rio Olympics.