10 questions ahead of women’s Hockey World Cup and can England win it?

Craig Keegan, former England/GB women’s assistant coach, runs the rule over what we may or not see at the Hockey World Cup in London

1. Can we gauge favourites from pre-tournament matches?

There have been some good valuable competitive games, but I am interested in the semi-final teams from Rio (England/GB, Holland, Germany and NZ) going up against each other for the first time in the World Cup for two years. I find that a little bit strange but perhaps it’s a reflection of the new Hockey Pro League and the fact there will be a huge amount of financial commitment involved to compete in that. But I would like to have seen England against Holland over a series and it would have whetted the appetite ahead of the World Cup.

2. The Lee Valley crowd: a help or hindrance?

The home crowd will be the challenge for England. The expectation is going to be high – and fair enough following the success of the 2015 Euros and the 2016 Olympics. That level is more relevant to handling and managing it, rather than playing in front of a crowd. They will handle it; there is still a lot of experience in the team and they will help the younger players through. But the home tournament coming off the back of two or three years of the most successful period in the sport’s history in the women’s game in the country will be a key area. How they respond to that will be interesting for me.

As a general rule, you are going to have to net 30-40 per cent of goals from corners. You are relying on the other 60 per cent on key individuals who have been there and done it: Alex Danson and Sophie Bray in particular. But tactically, the game is won or lost now in transition periods and building up against a set defence. I think the key moments will be the double turnover moments: you have driven into the circle, you’ve lost the ball in your attacking circle and you try to win it back in the next two, three seconds. That is where the goals will come from in open play.

4. Will goals be hard to come by in London?

It is becoming increasingly difficult to score against a set defence. Teams know how to break play down now and they are packing the defence with 11 players and making space very hard to manoeuvre. The teams which will do well are ones with quick transition and can win the ball back quickly. I would be concentrating a lot of my efforts in that area of the pitch while teams are in transition.

5. Who can surprise at the London World Cup?

It is a little too early to tell. With the German coaching contingent over in China now, they will be more ambitious than they have been. There has never been a lack of talent in China, or a lack of conditioned players. History has told that there has just been a lack of ambition at times in the game. They have been happy to settle with what they’ve got, but Jami [Mulders] was much more ambitious with Germany and they could well be a threat, especially in the knock out stages. They have a cutting edge now.

6. Experimenting with youth, does it pay off?

You are either making a decision now that you are building or experimenting for Tokyo 2020 – like Australia, who have blended more youth than experience. If that is their approach and they have made a strategic and conscious decision that they will take this group right through, then that could be a decision that they will benefit from in the long term. Teams who are seeing this as an opportunity to bring in some young players as an experience, there are other opportunities other than the World Cup, so teams will find that a challenging environment.

The Dutch and Argentina for me are so consistent with a conveyor belt of young talent coming through. They don’t need a lot of time to adapt to that level. They play in a club and under-21 environment which is superior to most which gives a huge amount of exposure. There’s no doubt that at the last few Junior World Cups, these two nations were a long way ahead of all other nations. You can see why they are in the top few in the world as they spend a lot of time developing those players. The Argentina under-21 squad in 2016 was very talented. I was very impressed.

8. Why Argentina are favourites

Argentina have retained several key players and have come through a period of turmoil in relation to change of coach and senior players retiring. They have put two years behind them and now have the best young players in the world [including world young player of the year Maria Granatto]. They are the most athletic team I have seen. That, combined with their willingness to score goals from open play, makes them a very dangerous opposition.

9. What’s to love about women’s hockey?

I’ve loved the competitiveness of women’s hockey. There are a lot more teams beating each other now in a tournament structure. In each pool, there are two or three teams which could come out to reach the quarter-finals. The other area of interest is the willingness to introduce new methods into the game. The women’s game went to three at the back, the men’s game has followed suit; eight players around the circle at penalty corners to create extra options, rather than having six or seven.

The men’s game, or some of the teams I’ve noticed, have adopted the same dimension. I generally love the athleticism of the women’s game; across the game it is more athletic than the men, which is all power and pace. The ability to eliminate and beat opposition in a one v one scenario, which the men’s game can’t offer as much. I think back to the days of Shahbaz Ahmed [the Pakistan great from the 90s] who could eliminate four or five people in one of his runs, which we don’t see in the men’s game. It’s all power-based with the men, the women offers flow and fluidity to their athletic way. There is less reliance on penalty corners in the women’s game. That’s pleasing to see. In the men’s game, matches can come down to who can win a penalty corner, whereas with the women it’s all about trying to create chances in open play. 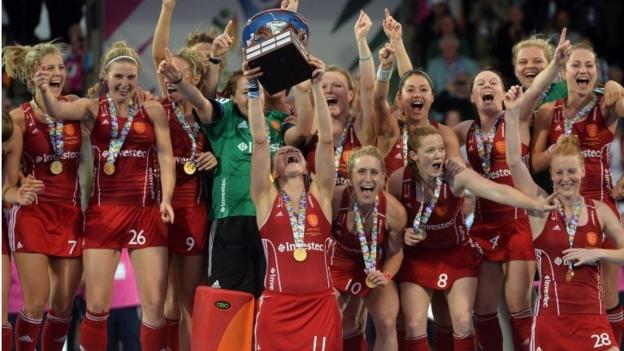 10. Can England win the World Cup?

They will find it challenging. You have to look back at the last two gold medals where in both tournaments there were ups and downs. They came through from a collective point of view and there is never an over-reliance in one individual and one specific aspect to how they do things. That is one of coach Danny Kerry’s biggest assets. The culture has always underpinned the performance and they have enough experience left to know what it takes to win. They will have the home support and the expectation of pressure also gives you an injection of enthusiasm and energy when you need it the most. Recent history has demonstrated that this team has managed pressure well at home tournaments, with gold in 2015 and medalling at London 2012 and there are a number of players who played in those events. If they manage that well, it will be much more of an asset than a negative pressure. Yes, they can win it.

Craig Keegan heads up performance sport at the University of Derby