At the Women’s Hockey World Cup there will be, for the first time, a mixture of both genders officiating to reinforce the sport’s ‘Equally Amazing’ values. There will be a total of 25 officials from 14 countries appointed, representing all five continents at this year’s tournament.

The life of a referee for any sport is hard and hockey is no different. There will be abuse, decisions to make and a rapturous crowd to contend with so keeping a clear head won’t be easy for the officials in the middle. We talked to Alison Keogh, an FIH qualified umpire from Ireland, who will be officiating in London.

Alison has been with the FIH for just over five years now and has been involved in hockey from a young age before becoming a club captain and the Three Rock Rovers physiotherapist, all while studying for a PhD in physiotherapy.  She spoke to us about her experiences as an umpire and the Hockey World Cup.

Q: What is the worst abuse you’ve received as an umpire and how did you deal with it?

Alison: Anytime I watch football on TV I think to myself, “why do they do it?”. There is just a total lack of respect there for officials. So, when I think of abuse my mind wanders to that sort of scenario where someone is being surrounded and later vilified across various media platforms. In that case, I consider myself very lucky to not have suffered terrible abuse! That’s not to say I haven’t received it, because we all do!

We’re only human and sometimes we have bad days, especially in the initial stages of our development. The mood of a game depends on so much; the teams taking part, their coaches, how their season is going, their memory of you as an umpire, your own day, your performance, your colleague, the type of crowd there, and so much more.

One match in particular stands out for me though. It was a local derby between two clubs in Dublin, both of whom were pushing for the top spot in the league. I remember it because I was having a bad day both on and off the pitch. Work was really stressful and unfortunately, I brought it out onto the pitch with me and as a result my management wasn’t what it should have been.

I had taken crowd side, which was also bench side, so I heard everything and anything that was said about me. The line that stood out was that it was a disgrace that I was an international umpire, and that if this was the standard of an international, then umpiring was in a bad place.

I think I was only umpiring about four years at the time, so I hadn’t yet learnt the management skills to deal appropriately with the abuse I was getting, but the problem was I didn’t deal with it because I believed it! I hadn’t yet developed the mental skills that it takes to be able to move on from a bad decision and continue with the game.

It went from bad to worse and I walked away in tears. Probably one of the most important things I have learnt from that episode, but also from the general abuse you can get at games is how to deal with it. You can’t always stop it (especially if it is off the pitch) but you can try to prevent it with timely management and good decision making, and if it happens, you can control how you deal with it.

I’ve worked hard on the mental side of my game to deal with that, and I now have a couple of strategies that I use pre-game to help me focus and plan my role, but also for during a game if it is required. Obviously the more consistent you are in your decision making the better, as I think inconsistency is one of the most frustrating things for teams.

Although it’s also important to be approachable and human. I think that is where hockey is really good, we allow a certain level of discussion once it is done in a respectful manner. I will always answer questions, particularly off the pitch. Sometimes the coach doesn’t agree with me but at least if they can understand my rationale they are more likely to accept it. Similarly, though I think it is important to be humble and admit if you couldn’t see, or you missed something, or got it wrong.

There is nothing worse than someone who is proven wrong digging in their heels, but if you can say look I’m sorry, and they know you mean it, coaches and players are much more likely to accept it. The human side of the game is so important in building a respectful rapport between everyone.

Q: Have you ever felt a umpire that you’re working with has ever been condescending towards you and what do you make of introducing men into the women’s tournaments and vice versa?

Alison: I can genuinely say that certainly at international level I have never felt that. I have been at tournaments where there is a difference in experience and that difference is accepted by everyone, but it is never held against you.

The more experienced umpires just know how to help support less experienced ones without patronising them. At the end of the day regardless of your experience the two of you have to go out and work together so it’s in everyone’s best interest that there is a good working relationship where both of you know your game plan.

Very grateful for the wonderful tournament & opportunities over the last 2 weeks. Great to get back on the pitch with @Wilson88Sarah again #hwl2017 pic.twitter.com/WaavcdABwl

As for umpiring with men or in men’s games, I’ve umpired both a lot at home. Again, I’ve never had a problem. I think the pool of us is so small at particular levels that there is a knowledge that if you are there, you’re there for a reason, and again at the end of the day you both have a job to do.

In the upcoming World Cup there will be male technical officials at the women’s event and vice versa but for now the umpires at both tournaments are all of the same sex. In time this may change, and I personally think that is a really exciting development! Hockey is always at the forefront of change and it is great to see that continuing.

Q: What games stand out in your memory that you’ve been an official for?

Alison: Internationally one of my highlights to date was during the World League final, the quarter-final game between New Zealand and Argentina. The New Zealand home crowd really got behind their team and created such an electric atmosphere. It was a really tight game which is always a good challenge to have. 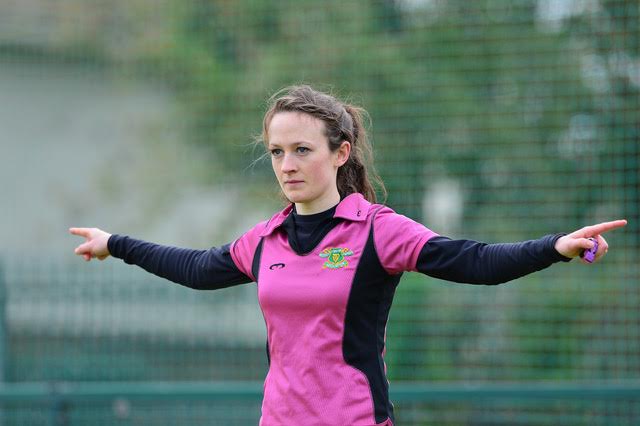 It was great to be a part of and was the first time in years that I had got to umpire with Sarah Wilson, a good friend of mine, which was also special. She’s one of the people I met first when starting out and we had been to so many tournaments together without getting to umpire, so it was nice to finally be paired.

In terms of domestic games, I have been lucky enough to be part of the first all-female team on a men’s match. Carol Metchette and I, who would be a mentor of mine, were put on a men’s cup game a few years ago but this year we got to repeat it within the All Ireland league, the EYHL. The speed of men’s matches is always much higher so they’re always very enjoyable. To have two women on it, there was maybe a little fear of how it would go but the teams were brilliant! They got on with it, were respectful and treated us just like anyone else which is all you could want going into it.

Q: During the last World Cup you were a fitness co-ordinator, how has that experience prepared you for what’s to come?

Alison: Unfortunately, not at all really! I wasn’t actually present at the last World Cup. I’ve been the FIH umpire fitness co-ordinator since 2011, when I was only really just starting umpiring myself. In 2011, the FIH created the ‘Road To’ programme which was the group of umpires (male and female) that they would be choosing their Olympic and World Cup panels from.

Anyone on these panels have had to send in 3-4 rounds of fitness results annually since then. My role is to collect and analyse these results to make sure people are reaching the standards set by the FIH and answer any queries regarding fitness or training that the umpires have.

So, in that way my role takes place behind a screen so there was no need to have me present at the last World Cup. However, since then I’ve progressed to now being on the panel myself while I’ve also been at various events including the Europeans and the World League Finals.

It’s my presence at these events that has prepped me more than anything because you get used to what to expect in terms of crowds, TV, schedules etc. After that, your preparation is very personal. For me there’s obviously a lot of fitness involved, but I would be doing that anyway. There’s also the mental side of your preparation, and then the usual … practice, practice, practice.

Q: What are you looking forward to most at this year’s tournament?

Alison: Everything! I’ve not umpired at Lee Valley yet, but English Hockey looks like it has been doing a fantastic job promoting the game and the events they’ve hosted in recent years. I’m looking forward to seeing it all first hand. The hockey is obviously going to be fantastic. Every game counts and at this level you can’t take anything for granted so I can’t wait to get out on the pitch.

We’ve got a great group of umpires and officials there, most of whom I’ve met before so I’m looking forward to catching up with friends from around the world. We’ve obviously got a job to do there but it’s always easier to do that among friends. We will all have been preparing hard for this over the last few months, so it will be great to go and put that all into practice.