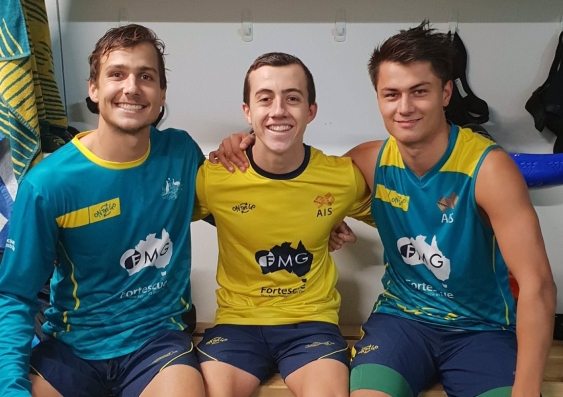 Mixing off-field activities alongside elite sport is not an uncommon sight for hockey players. In 2014, England’s Nick Catlin sat a three-hour legal exam before taking on Australia in the afternoon for a crucial World Cup encounter.

Now student Tim Brand has been praised after a rollercoaster few days in which he made his international hockey debut for the Kookaburras, scored his first senior international goal – and found time to sit his exams abroad.

Brand, studying commerce at the University of New South Wales, is currently in Europe preparing for the Champions Trophy.

He has been studying remotely in Perth due to his hockey commitments and sat one exam before he jetted off with the Australian team, but is having to sit two others while on the continent – in between training and playing.

Brand, 19, made his Kookaburras debut on Saturday against Germany in Moers and featured against the same opposition the following day – this time scoring a goal in a 2-2 draw.

Australia’s head coach Colin Batch said of Brand and fellow debutant goalkeeper Johan Durst: “For them to come in and play against such a good team like Germany is a good experience first up. It’s a tough debut but it’s also a very good one to play against such a top ranked team.

“It’s one thing to prepare in the training environment but to come away and play in these two Test matches has been very good preparation for us.”

Australia are defending their Champions Trophy title in the competition’s last event.

The Kookaburras begin their defence against Belgium on Sunday, before facing Holland, Argentina, India and Pakistan. The top two teams from the round-robin stage will progress to the final on July 1 in Breda.

It won’t stop there for Brand should he feature in Breda and will still need to sit another supplementary exam when he returns to Australia.