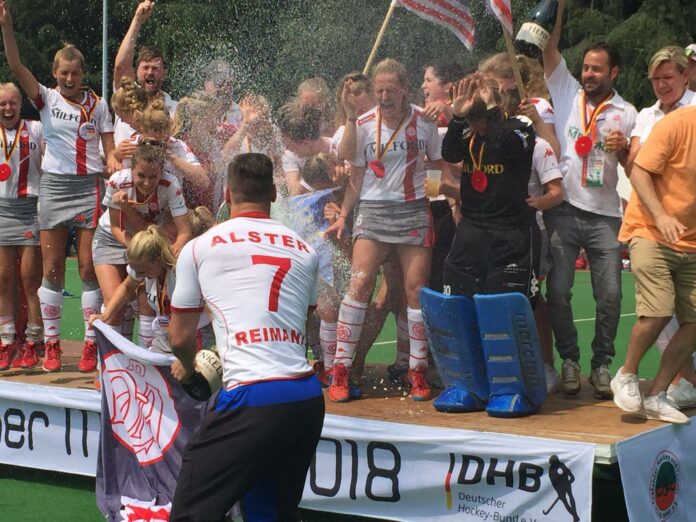 Alster went to the Final Four weekend knowing that local rivals Uhlenhorst were the team to beat. But the Hamburg side, which had reached finals’ weekend 10 years in a row, were beaten by a spirited Alster side 3-1 to spark wild celebrations.

And despite her limited German, Gibson was in tune with Alster’s “contagious” team commitment in a breakthrough season which also yielded the indoor title.

“We have such a great squad and the belief that the girls have is amazing,” said Gibson, who returned from the Commonwealth Games to play a vital part in the title win.

“I think the fact we won the indoor title in February gave us the confidence and belief that we could go and do the same outdoor for the first time ever.”

If there was one word Gibson understood it was ‘Zusammen’, translated as ‘together’. “We spoke about it a lot before the weekend and also had a very detailed plan from our coaching staff of how we wanted to play and that helped massively in the semi-final and final especially in the second half,” the Scot told The Hockey Paper.

“I mean I really couldn’t have asked for a better season. I sat on the bench for the whole of the indoor season but learned so much. It’s a totally different game in Germany than anywhere else. So to see the girls win the title and our goalkeeper Helen Heitmann to be outstanding and help the team win on penalties was amazing.

“Then to qualify for the European cup next season and finally win the league at the weekend I really couldn’t have had a better or more enjoyable season. It’s been great to make so many new friends and play with some of the German legends.”

Gibson, who joined the club this season from Reading, made a vital contribution in the final to stop Uhlenhorst going 2-0 ahead before Alster’s second-half riposte took the underdogs to victory.

But despite coming off second best in the Hamburg derbies before Christmas, Gibson says the indoor title paved the way for Alster’s memorable weekend.

She added: “I think towards the latter half of the season when we just kept winning we felt it could be our year, there are some incredible players in the team and the passion from them is like something I’ve never seen before.

“And although I don’t understand what they are on about most of the time, I can tell they are so passionate about the game, the team and the club. It’s contagious. I can’t really pinpoint a certain point of where I think we realised we could win but I think there was a belief the whole season and it never wavered.”