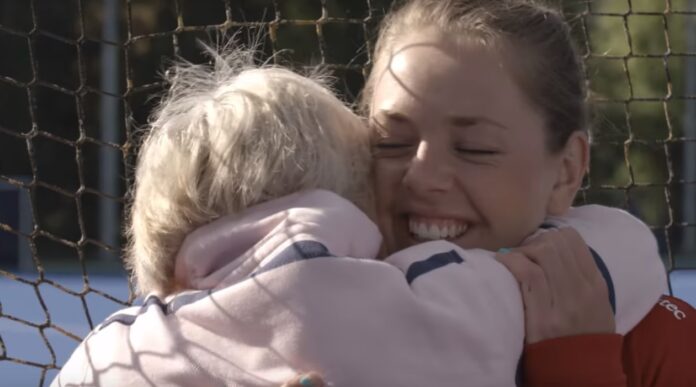 Ellie Watton is recalling the time she returned to her family home in Derbyshire after missing out on selection for the 2015 EuroHockey Championships – the last major event hosted in London.

Nearly three years on from missing out on playing in front of a home crowd, Watton is at Bisham Abbey on a video call to her parents, Deb and Paul.

“I remember coming home and crying quite a lot and you guys helping me through it,” Watton, 29 this month, reveals.

The response from her father is one that resonates across the #BehindEveryGreatPlayer video, which launched on Friday to mark the 50-day countdown to the Vitality women’s Hockey World Cup next month.

It is one of watching of her daughter simply benefiting from playing sport.

“We have enjoyed watching you progress, for us as parents it’s one of our proudest moments,” said Paul, as her daughter wipes away a tear.

Watton is one of a host of current England players featured in the campaign which highlights the support network behind achieving sporting success: be it family, friends, coaches, physios or volunteers.

Defender Giselle Ansley, who also stars in the campaign with her mum, Sue, said: “I was introduced to the sport of hockey almost from birth – my mum used to take me to games in my pram.

“From my first moments playing hockey, my mum has always been right by my side supporting me through thick and thin.”

England Hockey’s mission is to leverage hosting the World Cup on home soil to enhance the public perception of hockey across the country.

According to the governing body, the number of young girls playing the sport has doubled since 2012.

Emily Defroand, pictured above with her mum as a young hockey player, kick started the campaign at an event in London on Thursday night, on a panel featuring Sam Quek, the 2016 Olympian.

Gill said that parents’ involvement is key, either as a taxi service, helping the coaches or even picking up the cones at training sessions.

“It’s very important that the parents are there supporting their children,'” she says.