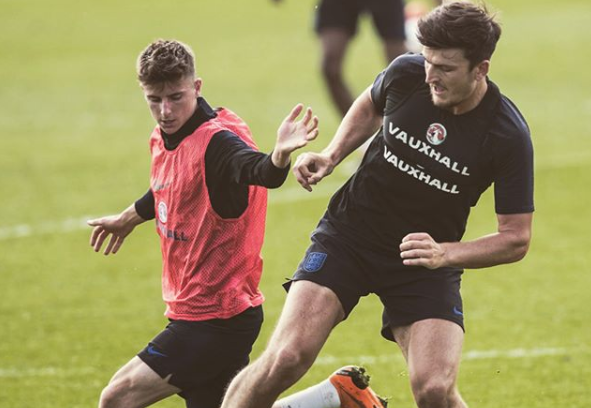 Harry Maguire, the Leicester City and England football star, believes that playing a raft of sports as a youngster, including hockey, helped to shape his burgeoning international career.

Maguire, 25, will soon be on the plane to Russia with the England World Cup squad – despite only playing one England under-21 match.

He played for Hull City before capitalising on his £17 million move to Leicester City. Last season he played every minute of Leicester’s Premier League campaign as he caught the attentions of England manager Gareth Southgate.

And Maguire says it is his school days in Chesterfield which provided the catalyst.

“It’s important to play as many different sports as you can as a young lad. It helps your game,” Maguire told The Times.

“Playing rugby helped me with my bravery, weaving in and out of players, helping with agility. Hockey helped my vision and passing, it’s football with a stick, trying to get it in the back of the net.

“I was incredibly competitive, growing up with two brothers, we’d argue and play against each other in the garden continuously. If we have a competition, I want to beat them.

“We’re doing this playground challenge here and I want to beat them. We used to play hours of tennis and badminton. It was really competitive.”

Maguire’s former PE teacher at St Mary’s in Chesterfield, Martin McKee, proved an instrumental coach for the England centre back.

“Martin wants you to play all sports, be fit and healthy,” Maguire added. “I ran cross-country for the county, made national standard in one race, about three miles, up in Derbyshire, running round lakes, [it was] fun but very hard. That got me really fit. I played cricket and golf.”