The standout maroon, green and white has been noticeable at league play-offs and on the continent when the club have played in Europe.

But the time has come to recognise this colourful jacket and ask The Hockey Paper readers whether Surbiton has the best supporters’ outfit in club hockey.

The idea was conceived by club member Dave Curry, who got the blazers made, and Molly Hanson, another avid chief cheerleader who is an actor and former player for Surbiton Ladies.

When Surbiton men qualified for the Euro Hockey League five years ago, the travelling support were looking for something “bold” to attract attention.

Jackets were made, as well as standout jumpers, with over 200 in circulation six years on.

“Everyone wanted to get one but some didn’t want to commit as they wanted to see what they were like before spending £100,” says Hanson, daughter of Samantha Bond, who played Miss Moneypenny in four Bond films.

“They are fantastic and all the parents of the juniors have asked about them, so they can then go and watch the national finals with them on.”

Even though it’s unofficial, the blazer has become a symbol of Surbiton both at home and on the road.

Hanson also made the point of referencing a lack of women’s attire for club members and supporters.

“There were club ties but nothing for the women that I could wear. You could wear a tie but I don’t wear a shirt or cufflinks,” she says. “It was something that we could all wear and join in for both younger and older members.

“There is a pride in wearing it and you feel part of something. It’s not exclusive and we are supporting the club not just the Ladies.”

The jacket will be out in force at the EuroHockey Club Cup this week when Surbiton host the European showpiece at Sugden Road.

And although it is unlikely that the jackets will be sported by rival fans, Hanson wants clubs to band together as the English national champions attempt to win the European Cup for the first time. 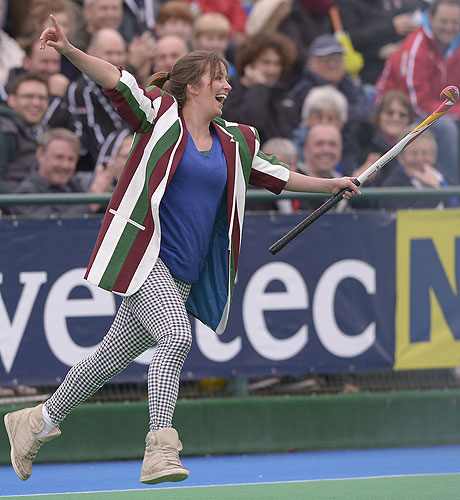 “We are the only English team at the Euros and it would be fantastic to get other clubs down and support as a nation as opposed to the fact that it’s Surbiton,” she added.

“The girls are undoubtedly an incredible team, but we want the support from everyone. You can’t generate the atmosphere on your on.”

So now you’ve seen the images, we want to know whether there are other club outfits out there across the globe which can rival Surbiton’s effort.

It could be a shirt, jumper, tie, dress or suit. Email newsdesk@thehockeypaper with your images or use our social media platforms on Twitter or Facebook.