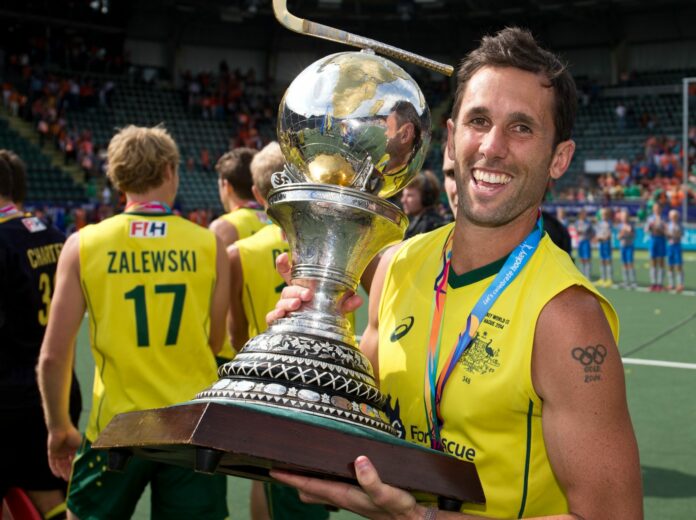 For those who don’t know much about Mark Knowles, the response of Australia’s chef de mission Steve Moneghetti to his selection as Australia’s flag bearer for the Commonwealth Games Opening Ceremony provides a pretty good insight.

Moneghetti pointed to the Kookaburras captain’s “character, integrity and leadership” and, at a time when the sport-loving nation needed to be reminded of these qualities, it was clear that the appointment was no coincidence.

Luckily for Hockey Australia, Knowles is also a very well-mannered bloke. Polite people always ensure they leave places as they have found them and, after well over 300 games, Knowles retires with Australia still in the top few of the men’s game, as they were 14 years ago when he came into the soon-to-be Olympic winning team.

In a glittering career that has achieved the highest team and individual honours, you might think that the Kookaburras’ current world ranking would hardly be worth mentioning.

That would be a mistake. In a period in between the two major tournaments, and where he has only played a handful of games, Mark Knowles has arguably been as important to the Kookaburras as at any other time since 2004 and that tells you just as much about who he is. Character and leader.

Step back little more than 18 months ago and Australian hockey was in trouble. The No.1 ranked men’s team had stuttered through the pool stages of the Rio Olympics and been unceremoniously dumped out of the tournament at the quarter-final stage by the Dutch.

Soon after, the previously in-form Hockeyroos followed suit in the semis. In the wash up, both teams found themselves needing new coaches and staff, while Hockey Australia itself scrambled for a new board and president.

Unlike any Olympics in recent memory, the Kookaburras also faced a much higher turnover of players than ever before. Household (for hockey) names like Dwyer, Turner, Kavanagh and Orchard retired. New coach Colin Batch’s arrival saw him immediately look beyond several other established World Cup winners from only two years before.

Thus ensued a new coaching set-up, a crop of young and inexperienced players and without many of the wise, tough and talented heads that had guided Australia to everything bar Olympic gold over a decade. The Kookaburras, a team for whom medal ceremonies were as usual as warm-downs, were in unfamiliar and uncertain territory. Knowles included.

Fast forward to the medal ceremony at the Commonwealth Games and Batch and his team will have been very satisfied with where they are in a relatively short space of time.

Obviously this is not all down to the outgoing captain and there is great credit owing to Batch, his assistant coaches and of course the players. Nonetheless, it can’t be underestimated how important Knowles’ decision was to stay, or was for this critical phase.

For the new coaches, the endorsement of such a talismanic figure will have been invaluable in establishing their methods and style that now look fluid and embedded.

For the players, having Knowles at training, in meetings and as the guiding force on the pitch in practice games and tournaments will have been so valuable in each of them confronting the challenge of filling the void left by the outgoing players.

This bigger than normal transition has also seen the Kookaburras reduce their average ago from late twenties in Rio to now being somewhere closer to 26. Included in that is the precocious new talent of 20-year olds Jake Harvie and Lachlan Sharp.

Of course, these players have earned their spots on their own talent and ability. But it’s not hard to imagine the extra benefit to these player’s knowledge and confidence a year or so with Knowles will have given them.

With victory at the World League Finals in Bhubaneswar in 2017, the rebuilt Kookaburras returned to the top of the FIH world rankings and from what we know, it must have been around this time that Knowles started to contemplate the “R” word.

While there is nothing to suggest that the two are directly related, it is nonetheless consistent with his character that Knowles’ thirst to right the Rio wrongs would be satisfied, with his team repaired and restored on top of the world.

Unsurprisingly, neither his announcement nor his flag duties provided any level of distraction to Knowles’ focus on the job at hand at the Commonwealth Games.

With the exception of an errant penalty stroke in the final, his last tournament for Australia was everything we have come to expect.

The relentless quality of tackles, passes and intercepts all helping keep the team tick over and yet with the slightest hint, as we saw with his incredible aerial pass to Kieran Govers at the 2014 World Cup, that the spectacular solution was in the locker if ever the team needed it.

Predictably then, the timing of Knowles’ retirement reflects the same commitment to those around him. Players able to choose their point of retirement usually opt for one last crack at either an Olympics or World Cup winner’s medal.

But that justifiable quest for the perfect mix of team success and their own swansong offers no guarantee, as the departing players from Rio know too well. Occasionally it works out but the simple odds of victory say that most of the time it doesn’t

For Knowles, the Commonwealth Games offered a better option with more certainty. The location and profile offered a wonderful (and rare) opportunity for his family and friends to share his final moments on home soil.

For his beloved Kookaburras, this was a point up to which he could guarantee his complete level of commitment and focus. Beyond that, there was doubt. And, to quote Robert de Niro in Ronin, “when there is doubt, there is no doubt”.

And so the same character, integrity and leadership that Moneghetti referred to has therefore led Knowles to retire with the World Cup only months away; the possibility of an historic third consecutive win outweighed by the desire to be with his family and the certainty that the new-look team goes to Bhubaneswar in form and on top of the world.

Rightly, he doesn’t leave empty handed and another Commonwealth gold medal now sits alongside the other three.

For Hockey Australia and the Kookaburras though, this last one might well be more valuable than the other three put together.

Read Todd’s incisive columns every Friday at The Hockey Paper