Tributes have poured in for an “inspirational” hockey player and teacher who died after collapsing on the pitch playing for her beloved club in Devon.

Maggie Fasey, an international Masters player who was also a revered teacher in the West for 40 years, died after suffering a suspected cardiac arrest during a 3rd XI match for Tiverton White Eagles at the weekend.

The news was confirmed by Tiverton High School on its website before a raft of tributes were paid on social media by friends and the local community.

“It is with great sadness that we announce the sudden passing of our colleague Maggie Fasey,” the statement said.

“For many years Maggie was very much the face of hockey both at THS and within the wider community. Her skills and experience were such that she represented England at international level having won a silver medal in the World Masters in 2014 and more recently a gold medal in the Grand Masters European in 2017.

“Although Maggie took retirement from her teaching position at THS in 2015 she remained an invaluable part of our community as the lead of our Primary Transition work. Her calming presence amongst the year 6’s will be greatly missed.

“Our thoughts and condolences at this difficult time are with her family, friends and the many members of the Tiverton community whose lives she touched.”

Fasey played for England Masters teams, including the Over-55s squad where she notched a hat-trick on her debut in 2012.

However it is with Tiverton White Eagles and the local community where she proved a “dear friend” to all. 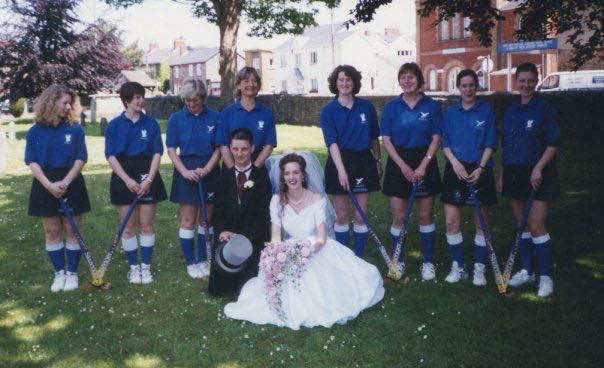 Tiverton’s chairperson Wendy Steele wrote on Facebook: “I cannot describe how unreal all this feels. We can only feel enormous sympathy for Mick, her husband, and her two sons, Dave and Chris.”

Michelle Lovegrove, who was tutored by Maggie before becoming a lifelong friend, said: “Since I was nine years old you have told me to run faster, jump longer and throw stronger.

“Then at twelve years old you brought me into the world of hockey and after showing some promise, you convinced me to go and play for White Eagles (underage I might add!) I remember my first game at Taunton School like it was yesterday … I didn’t look back and White Eagles became a huge part of my life. Not just a hobby, but a lifestyle choice that has afforded me an extended family and wide circle of lifetime friends.

“I am pretty certain that she was aware that she touched a lot of lives, but she was far too modest to anticipate the appreciation that is coming forward from parents, students and hockey players alike.”

Lisa Whitrow added: “She was such an inspiration and a lovely caring but still fun lady. She’ll be missed by everyone.”