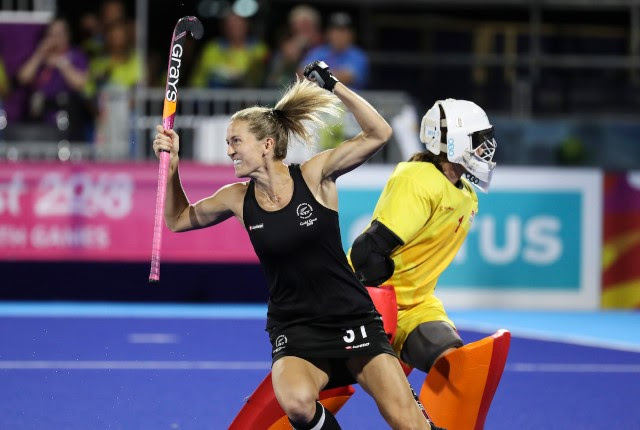 Gold Coast – England were denied a fourth shot at Commonwealth gold by New Zealand – but were still outdone by an Australian on Thursday night.

In another shoot-out at the backend of a major tournament, Grace O’Hanlon built a wall around her net and saved from four English sticks.

A Queenslander by birth, O’Hanlon was scouted by the Black Sticks in the last few years – she has a Kiwi father – and moved from Perth in early 2017 after a lack of opportunities in her native country.

She didn’t have any opportunities for 60 minutes here as she was on the subs’ bench and only entered The Cauldron, as Maddie Hinch described it, when the shoot-out was confirmed and she replaced Sally Rutherford.

With the drama locked at 1-1 after a goalless normal time period, Hollie Pearne-Webb stepped up for England’s last go in their first shoot-out in a major tournament since Rio but couldn’t convert.

New Zealand captain Stacey Michelsen, their best player by a Trans-Tasman distance, then took the most authoritative shot all night. Her timing atoned for NZ’s own shoot-out loss to England at the same stage in 2014.

She stepped up, forgot about weaving across Hinch, and instead planted a spectacular flick shot to send the Black Sticks into their first final since Delhi 2010 against  Australia, who edged India 1-0.

Have international ‘keepers tuned up to the studious Hinch and her infamous notebook? It looked that way on Thursday night as the athletic O’Hanlon prevailed, while Hinch, who bustled the Kiwis as is her wont, cut a hugely disconsolate figure afterwards.

In the battle of the notebooks, O’Hanlon, who keeps her own one, had read the script but for not knowing anything about Pearne-Webb’s tendencies from the 23m line. It was, she said, a flip of the coin.

“Grace is a really mobile keeper and did a great job,” said Samantha Harrison, the Black Stick still shaking with adrenaline. “We do a lot of homework to see what other keepers do. They are really diligent on their scouting.”

Little wonder she was shaking. After being dropped after London 2012, taking time off the game, missing the Rio Olympics and returning to the performance squad last year, this was her biggest game for six years.

“Our defence was amazing tonight,” she added. “That really helped us out there. There is so much excitement and it’s doing the basics.

“It’s important to stick to our structure and grind it down and make the most of our opportunities.”

The stats told us that New Zealand had 11 shots to England’s eight. Yet England were bearing down on the Kiwi’s goal for a majority and played perhaps their best tournament hockey of the week. The only crux being that they just couldn’t pass the strong back line employed by Mark Hager, their coach.

For England, balls were being lost in or around the 23m line, while captain Alex Danson, playing her 300th Test match,  and Sophie Bray couldn’t find a way to goal.

England also had five more penalty corner offerings. This was the third match, with over 20 chances to boot, that they couldn’t score from the top of the D.

“We came here for gold. What you saw was two high quality teams playing against each other,” said England’s Sarah Haycroft. “There wasn’t much between the teams. It came down to those fine margins.

“We did everything right but credit to New Zealand.”

While Hinch parried and punched a number of shots away in normal time, England were keeping the Black Sticks’ on their toes at the back.

The third quarter provided the best 15 minutes of the match, but still the deadlock couldn’t be broken.

Then, in the final phases of battle, Bray and Danson broke but the Kiwis again held firm and cleared. The ball was sent straight up field where Olivia Merry flashed inches past Hinch’s far post a second before the hooter.  But not before Hinch had forced it wide. She really could not have done much more on the night.

“If you look back at the match we were on top for most of the game,” said defender Laura Unsworth. “That’s positive going forwards and since going to New Zealand in November we have definitely taken a step forwards.”

This was a step back from their golden ambitions, with a bronze medal on Saturday on the line instead.

It proved a tale of two Graces in the semi-finals. Grace Stewart’s third quarter brilliance – a wonderful volley hit – did for India was just enough for the host nation.

The Hockeyroos have hardly been convincing in this tournament and are doing just enough to keep themselves in the mix. It’s tournament hockey that counts after all – as well as superb goals.

Stewart said: “It is very exciting. Not often those shots come off. They are mostly air swings, but it was great to see it hit the back of the net.

“It was very lucky I slotted it to be honest. We probably could have snuck another goal in, but we didn’t and I wasn’t really that stressed.”

The gold and bronze medal matches will take place on Saturday.