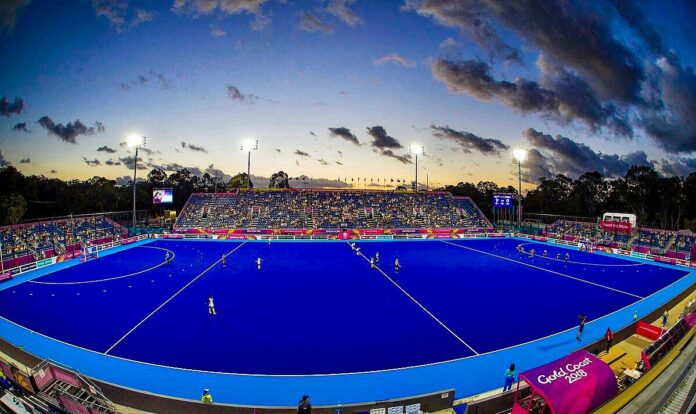 Welcome to coverage of the Commonwealth Games semi-final clash between England and New Zealand, live from the Gold Coast Hockey Centre. All times are local. Press F5 to refresh.

Rio’s Olympic champ Pearne-Webb can’t convert and Michelsen goes straight down with the best convert of the lot. A straight flick past Hinch. NZ into the final. England play for bronze.

FT: Well, well, well. NZ had the majority of shots there, 11 to 8. Now it’s the shoot-out. England women missed three from the pen stroke during the Pool stages. Will that have an effect?

0: Thrilling end. Bray and Danson evade the circle and NZ break it down. 11 seconds left… NZ in the circle. Merry strikes handsomely. It is inches wide. Then the hooter! SHOOT-OUT.

7: Three around Danson in the D. Cleared. Haycroft can’t find an on-running Bray. Cleared. Find Bray with space and she’s off. Surely deemed for the old shoot-out now.

11: Both defences have been up to the task tonight. England  just can’t find that final stick. Runs breaking down with their central runs. Unsworth carries into the D, Haycroft finishes into the net but infringement.

14: NZ pen corner. Goes low again and Ansley is on the line to clear. Classic, cagey semi-final this.

1: Sophie Bray late stick earns a two-minute suspension. NZ into the circle in last seconds. Snap shot and another Hinch right save block. Pretty easy for an Olympic champion. Then, a video review, as ball rattles backboard. Judged to have come off Webb’s foot. Long corner.

3: England right into this part of the quarter. Finding central space. They have lost the ball as it breaks down, but Webb and Co clean up at the back. A PC… goes to Unsworth and the low hit goes fractions wide.

Come on @EnglandHockey listening to commentary whilst driving up north, @h_richardson8 hit me up! Congrats @AlexDanson15 on your 300th cap #GC2018Hockey

7: Kelsey Smith having a decent game for NZ. Ball breaks to Danson, coming increasingly into the game with her last third runs. High ball in the D from deflected shot.

9: Webb to Danson from the D. England soon into the 23. Jo Hunter loses ball and NZ clear and break.

14: Central runners trying to get into the game. Townsend with latest effort. At other end, NZ scuff tomahawk shot. Needs a goal this one.

15: We’re off in the third quarter. Can England find that clinical passage of play they were beginning to create at back end of the first half?

1: NZ weave down the left, ball crossed and no one there. NZ’s own problems since Rio have stemmed from a lack of goalscorers. Solid in defence, as they are here tonight, that final strike is missing. When there was space in the D, they couldn’t convert.

9: STAT ALERT. I’ve done some quick numbers. After 3 from 18 in opening two matches, in their last three, including this one, England have had 22 pen corners and haven’t scored one. Problem area?

15: First quarter over. Neat runs down the right from England, the latter from sprinter Ellie Rayer, who weaves into the D but no one can latch on to the final ball.

9: Hollie Pearne-Webb is on penalty corner hitting duties, and two of them are cleared with not much danger from the Black Sticks point of view. England more into the first quarter now.

8: Sam Harrison goes down in the D. No, not a foul or even a penalty for those new hockey converts who have found their way here to this historic blog. Just a routine clash. NZ on top with circle penetration thus far.

5: Anna Toman involved in the action early doors with some timely interventions She’s had a very steady tournament.

3: First shot on goal comes from Anita McLaren. On the turn, she spins and rifles in mid-height but Maddie Hinch parries away,

1: We’re off and running on the Gold Coast. An ever-so-slight breeze. England holding ball at the back. Patient start.

1843: England topped their Pool, despite defeat to India. They remain a largely inexperienced unit with a raft of new recruits since Rio. But have big match winners on the day. Alex Danson’s ankle remains a concern but she plays tonight. And why not? It is her 300th international appearance. But as she will tell you, she won’t be thinking about that

A moment's peace. Coaches Mark Hager and Danny Kerry chat ahead of Eng v NZ. One hour to push back. #GC2018Hockey pic.twitter.com/wQCheP5YzA

1840: New Zealand have shipped just one goal – in the opening match against Scotland – remain unbeaten, but haven’t scored in the last two matches. That remains a concern for the Black Sticks over the last 18 months or so.

1835: We’re under 30 minutes away from the first semi-final, with England women attempting to reach their fourth final in the six editions at the Games. New Zealand are aiming to reach their second final and first since Delhi 2010.

1830: Hello and good evening. Welcome to semi-final action from the Gold Coast. It’s the team sports who are about to enter the fray at these Games. Netball, hockey and rugby 7s titles are to be won and we’re at the semi-final stage in the hockey.