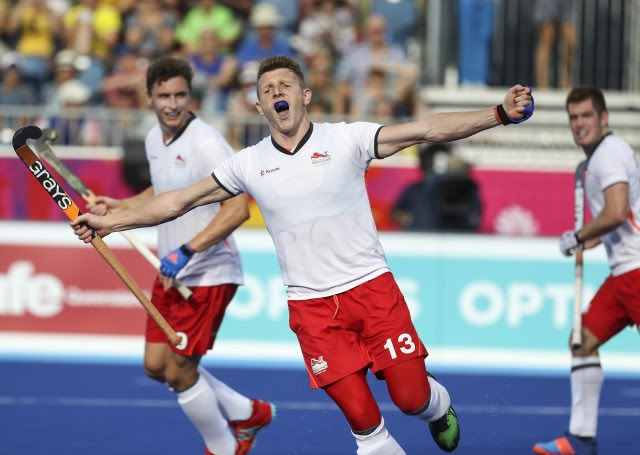 Gold Coast – Sam Ward was dissecting his hockey future four years ago. Can you believe that this morning, on a garage forecourt somewhere in Loughborough perhaps, he could even be persuading car buyers to sign on the dotted line instead of banging in the goals in his beloved England colours?

That is now in the past. On Tuesday, the 27-year-old forward moved his Commonwealth Games goal tally to six after a surging second-half hat-trick saw England beat a hugely spirited Wales – the only part-time side in the Pool group – at a humid Gold Coast Hockey Centre.

Despite England coach Bobby Crutchley describing the opening 30 minutes as “probably the worst we’ve played for a long time”, he tellingly believed that there is even more to come from Ward.

He said: “Wardy has some great attributes. The thing about international hockey these days is that you can’t be one dimensional, you have to be multi dimensional.

“We know there are areas of the game that Wardy has to work on but without doubt he has goal-scoring ability.”

The win left England top of their pool, with a draw or better against India on Wednesday enough to see them qualify top. They will play either Australia or New Zealand for a place in the final after the Kookaburras eased past Canada 4-0.

However for either of England’s antipodean opponents, the signs looked pretty good after the first-half here, with ball retention, purpose and discipline all lacking.

Captain Luke Hawker, meanwhile, had a significant first-half impact and deflected Wales into the lead with a muscling run as an England defensive trio was left in a static triangle.

What a comeback from England 👏

Further trouble for England then came when Ollie Willars was yellow carded before Wales ended the half with three penalty corners. They scored on the third with another deflected shot, this time from Ben Francis.

“What we put out there in the first half wasn’t up to our own standards,” said co-captain Phil Roper. “They are a good side and we shouldn’t have underestimated them. In the end, we showed our strength, heart and resilience.”

A Liam Sanford pass found Ward’s angled stick, his second was classically executed and his hat-trick was sweetly struck on the turn with three minutes left.

The Welsh all but fell to their knees on the hooter as their semi-final dream was blown.

“Wardy is a proven goal-scorer time and time again,” added Roper. “You need big players to step up in big games.

“We back him to get the ball in the D and normally he does the business for us.”

Former captain Barry Middleton, who mistimed his shot allowing for Ward’s third, then pointed to England’s resurgent turnaround as a unified effort.

He said bullishly: “We look at headlines and goals but today was about the team, the intensity we put out there on their back four to come and play through us, as well the work in the back four is what we pride ourselves on.”