World Cup fate is in our own hands, says USA star Adam Miller 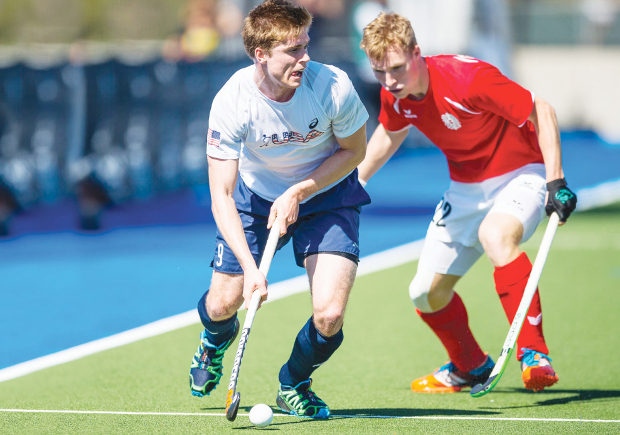 The final men’s Hockey World League (HWL) Round Two event is underway in Trinidad and Tobago and, with it, rests Scotland’s fate.

If the team finishing third in Tacarigua is ranked higher on the International Hockey Federation (FIH) world rankings than 27th-placed Scotland, then the Blue Sticks will not be making their first ever appearance in the HWL semi-finals.

For two players who ply their club trade in the UK however, the dream of playing in either South Africa or London this summer, and still having a chance to qualify for the 2018 World Cup via the HWL route, is very much in their own hands. It is a prospect that the USA’s Adam Miller, who plays for Southgate in the East Conference league, is looking forward to with some relish.

‘We want to take gold,’ says the 25-year-old bullishly, before pausing to add, ‘Although a good finish for us would be second place. Qualifying for HWL Round Three is massive for us. It puts us in a place where we might qualify for the World Cup.

‘That would be a real game changer as we would get the chance to play together more often and get more funding. We all want to raise the profile of the sport in the country.’

Southgate HC is well represented in Trinidad and Tobago as Will Holt and Paul Singh are also part of the USA squad – who you can put money on after checking out the Willhill Hockey betting odds – that is battling for a top two finish. They all know that third place is not good enough as Scotland is ranked two places higher than the north American side.

Miller, whose dual nationality means he has also played for the England U18 and U21 team, is a relative new face on the international stage with 28 caps to his name.

However, someone who has been here several times before is local legend Kwan Browne, a man with more than 300 international caps for the hockey-loving island.

Browne first played for his country when he was just 15 and has gone on to represent Trinidad and Tobago at Commonwealth Games, Pan American Games and the Pan American Cup on several occasions, as well as in HWL Round One and Two events.

He is also well-known to the hockey fraternity in the UK. Formerly player/coach at Canterbury, he is now coach to Premier League high flyers Hampstead and Westminster. He is also the current Great Britain U23 coach and England U21 assistant coach.

For Browne, there is a world of difference between hockey in the UK, or Europe for that matter, and hockey played in the Pan American nations.

“The hockey here is so much more unpredictable,” he added. “It is like comparing South American football with the football played in Europe. The culture in many of the Pan American countries is all about flow, excitement and individual skills. In Europe, it is a lot more organised and structured.’

For the thoughtful coach, the best thing to happen to hockey in Trinidad and Tobago was a mass exodus of players to European club sides. “It is not so much the skill on the ball but the understanding of the game and the realisation of the importance of basics,” he said.“It is recognising the places where you have to be safer with the ball. That is what you learn in Europe.

‘A few years ago we had seven or eight of the team all playing outside Trinidad and Tobago, that made a massive difference, our ranking went up to 19th in the world. At the moment there are just two players playing abroad, and our ranking has dropped to 33. It kind of goes hand-in-hand.’

Miller agrees that there is a big difference between hockey in the UK and overseas. For the midfielder, the current competition in Tacarigua adds a different dimension to the game.

“There is real variety in the teams you play against,” he went on. “In Europe, I find it is very rigid and almost over-structured. There is very little difference between the way most top club sides play.’

The UK-based player added that it was not just the different styles that he and his fellow USA club mates would need to adapt to but the temperature would also be throwing up its own challenges.

“This is a totally different climate, it is certainly one of the biggest challenges we have come up against. I have had to try and adapt quickly, coming on the back of an English winter.’

While the USA is looking for a podium finish, Browne would be happy to see his team finish in the top four. He explains that a lack of finance has meant very limited preparations but adds that the format – pool games, followed by an all-important quarter final – could suit the home side.

“It will give us time to get into the tournament, and then, well tactically we know we are very well prepared, so who knows…”