Susannah Townsend is back up to speed after long-term injury 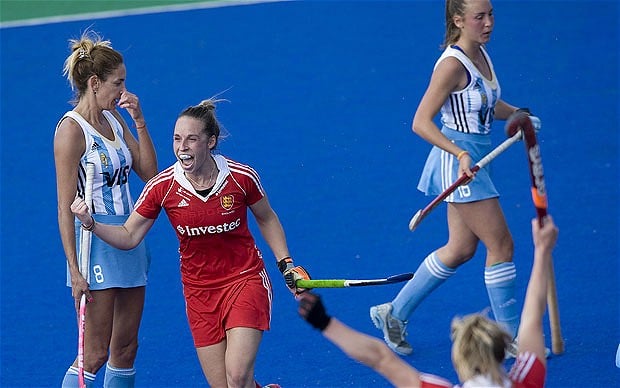 Susannah Townsend likes a challenge. Yet she admits, bregrudgingly, that some of the younger recruits in the centralised programme might just be quicker than England’s formidable midfielder. “I am quite jealous about that,” she joked.

Townsend is back playing hockey in England – against Argentina on Saturday, and the Netherlands on Sunday – for the first time since the Olympic Games final after nine month’s out recovering from a knee injury.

The 27-year-old picked up cartilage damage in her knee before Rio, but a mixture of adrenalin and physio work helped her through to gold. She finally returned during last month’s Test series in Spain.

Then, in her third game for her club side in Belgium last season, she felt the pain return and underwent surgey and the long road back to recovery.

Since Kerry announced the names of the new faces at Bisham Abbey, tireless runner Townsend has been a keen observer on the sidelines.

She mentions Ellie Rayer and Jo Hunter as the speedsters to rival her and ‘bestie’ Lily Owsley, herself a former long distance specialist.

“I’ve been giving Ellie grief that I am faster than her,” admitted Townsend. “I have a few doubts in my mind but I will back myself and if anything it’s extra motivation.

“I’m just back from rehab so I back myself to get back to the top.

“It has been tough but it couldn’t have come at a better time and hopefully I can come back better than I was.”

Townsend added that the 15 new names in Kerry’s squad have come to Bisham Abbey at a “great time” for the sport.

“Hearing Ellie Rayer talk about she was inspired to be part of it after Rio. That’s what we have tried to do,” said Townsend.

“We have an incredibly talented team and the last four years we have tried to work on the fact that we can be a talented team but you need that culture that feeds performance.

“With the numbers coming in, it’s a little bit easier for them. For this weekend, it will be the first time some of them have played in front of big crowds.”

And Townsend will no doubt be eager to show her running prowess once more. Not only to the Test debutants, but to the sell out crowd who will be watching the Rio heroes for the first time.