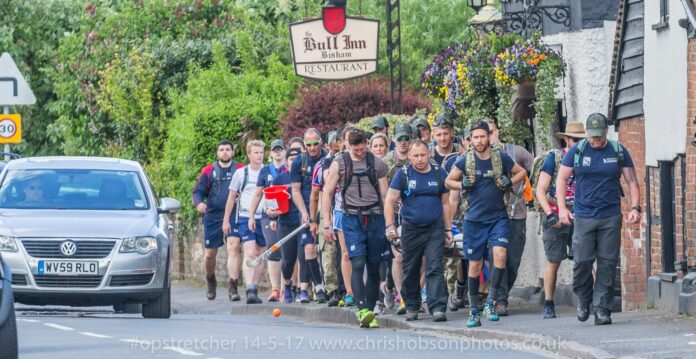 As a national sports centre, Bisham Abbey has over the years provided training and coaching facilities for a wide variety of top sportsmen and women, but an event held there last November surely broke new ground.

The Berkshire estate was the setting for the launch of the 2017 Hockey for Heroes Charity Tour to raise much needed funds to help provide support to injured members of the services.

Six months on and, on Friday, they are ready to embark on their toughest challenge yet.

The programme that has been drawn up for a 28-strong team of male hockey players is so physically demanding that it will make a gruelling sport like marathon running appear as energy-sapping as taking a dog for a walk in a park.

Over 10 days, the team will walk 200 miles from Sophia Gardens in Cardiff to Marlow Hockey Club.

All the way along the route they will take turns carrying a stretcher on which will be lying Dom Lovett whose wounds when he was serving as a marine left him suffering from quadriplegia, unable to use any of his four limbs.

On paper, walking for between five and six hours a day should not be too taxing. However each day they will be stopping at a selected hockey club to play three 70-minute matches and conduct other fund raising activities with the target of collecting more than £70,000 for Help for Heroes.

Hockey for Heroes has staged two previous tours since the charity was set up over a bottle of whisky in a back garden in Liverpool by ex-Servicemen Gary Ryder and Carl Woods.

In 2012, they played 30 games as well. Two years later they combined more hockey games with the challenge of the climbing the three peaks Ben Nevis, Scafell Pike, and Snowdon. But Joel Forrester, the CEO of Hockey for Heroes along with Ryder and a former Paratrooper, says their third tour is going to be even bigger

He joked: “It’s pretty stupid when you look at it to have 30 games of hockey and walk all that way in 10 days.”

But then he added on a serious note: “We wanted to do something really big and get Dom involved as well and we knew he would have to be carried on a stretcher.

“Our target is simple – we want to raise as much money and awareness for injured servicemen as possible while using hockey and an endurance event as our platform.

“The Help for Heroes charity helped me through my post traumatic stress because they do look at overt and covert injuries.

“Now we are going to support them by dishing out leaflets and carrying buckets to collect money while we are walking along the roads.

“And when we get to the hockey grounds we are hoping that people from local clubs and their friends along with local schoolkids will give up support.”

In his own hockey career, Forrester played for several clubs, most recently Marlow and now, while working in the Police Force, he coaches the Ladies at Sonning.

But as CEO of Hockey for Heroes he also spends his time negotiating with potential sponsors and the main backers of the 2017 will be the Welsh biotechnology company Celixir whose regenerative medicines help a lot of ex-Serviceman and could also be needed on tour by the players.

They will be watched while walking and playing by a team of medics headed by 61-year-old Rob Scott, the chairman of the Hampshire-based Fleet & Ewshot Hockey Club who is a chiropractor and joining him on the Tour’s support vehicles will be a physio, a sports massage specialist and a paramedic trauma specialist.

They have drawn up a dietary plan for the players and written to the clubs playing against them with details of the food they will need to eat after matches.

“We have sent advice saying what we would like to eat rather than the standard sausages and chips post match tea. Basically we will be looking for them good carbs and protein. Because the tour is going to make a marathon look like a stroll in the park.

“Apart from injuries that can happen while playing the hockey games when doing all the walking there may some lower back or leg related problems and there could also be problems with the arms from carrying the stretcher.

“We will do whatever we have to do because the important thing is to get them all across the finishing line.”

Hilton Hotels have teamed up with Hockey for Heroes by offering reduced rate accommodation along the route and the plan is for the players to get around seven hours sleep in beds at night.

But Scott doubts whether many, if any of them will pay a visit to the hotels bars as well.

No alcohol? It’s not a tour rule and the odd beer maybe drank but they know they can’t afford to wreck their bodies and destroy the temple

Scott worked in the rowing village at the 2012 London Olympics and is hoping that his contacts in the sports fitness industry will make themselves available for the tour so that there is plenty of help throughout the 10 days.

But the tour is not just about male hockey players. Forty one women turned up to take part in a selection process to create a Ladies’ team which will not only walk from Cardiff to Marlow but will be playing matches.

GB’s Olympic gold medal captain Kate Richardson-Walsh and coach Danny Kerry are both keen to give the tour all the support they can.

“I just wanted to get involved because it is a fabulous cause. People who serve our country are prepared to give their lives for us. So I will be trying to help raise money to give something back to them,” said Richardson-Walsh.

And Kerry added: “Help for Heroes provide a much needed support for our servicemen and women and without the work of bodies like this I worry how much support there would be for them.”

And once the tour is underway drumming up that support will be Zoe Yates, who is player coach at the South Berks Club in Wokingham.

She already says she is putting in around two hours work a night organising all the tour logistics and once it does start she will be on one of the support buses as part of the management team as ‘a gofer’ attending to players’ needs and looking after publicity and social media.

“We want to help them raise their profile and spread the message of the help needed by people who suffer injury in the services.

“And recently that has become more of a challenge because in war time it is much more documented that men and women come home injured.

“But while that is not the case at the moment, their treatment for post traumatic stress maybe needed more than ever.”

And she believes the efforts being put in by hockey to raise funds for Help for Heroes is vital. The Cardiff to Marlow adventure will showcase that – and more.

This story was first published in a December issue of The Hockey Paper.

For full route and sponsorship details go to hockey4heroes.co.uk