Derby HC ‘keeper Murphy opens up about depression ahead of marathon 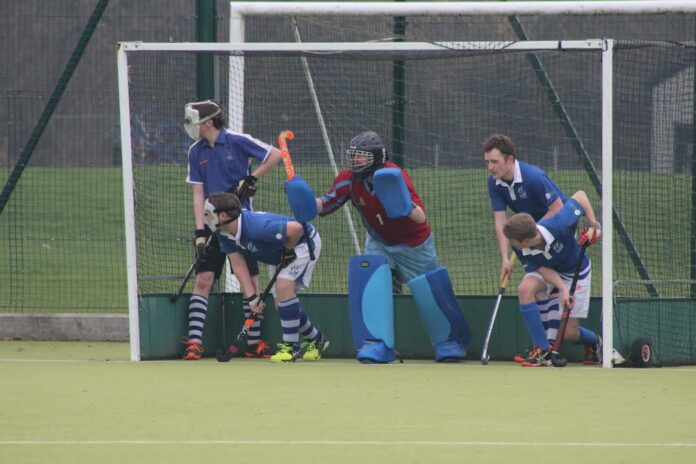 When the weekend comes, stepping over the white line onto the hockey pitch is usually “a great escape” for Will Murphy. In darker moments, he still can’t quite free himself and has found it a struggle – even from behind the relative anonymity of his goalkeeper mask – to finish matches.

The 30-year-old suffers from depression. In less than two weeks, there will be no hiding place when he takes to the start line of the Virgin Money London Marathon. He will valiantly attempt to run the 26.2 miles – his first organisational run of any note – resplendent in his goalkeeper kit, kindly donated by OBO, the between-the-post specialist.

With his hockey season now over, Murphy is focusing on several strands: fitness and raising money for Mind, the mental health charity. Moreover, he is remarkably candid in not only talking about his illness but also how he might fare on the streets of London.

As somebody who is looking to finish it, things are going okay,” he tells The Hockey Paper. “There is no strategy yet. It was never about going sub-four hours waving in my GK kit as the Kenyans wiz by. It’s a case of getting to the line under the maximum time.”

He certainly has the right attitude considering that he was late to training. Murphy was put on the waiting list last October and subsequently put the setback to the back of his mind, until he opened an email in late January telling him that a slot had become available.

He recalls: “I sat for an hour to think about it. I had just over two months to raise £2,000 and train for 26 miles. I didn’t know if this opportunity was going to arise again. I just went for it. People said I was a nutter for attempting it – but that’s why I’m doing it!”

Umpire fees have been waived for donations, while fundraising matches against sides like Ilkeston have taken place. The hockey fraternity has got on board and the aerospace engineer is currently well on the way to making his initial fundraising target. 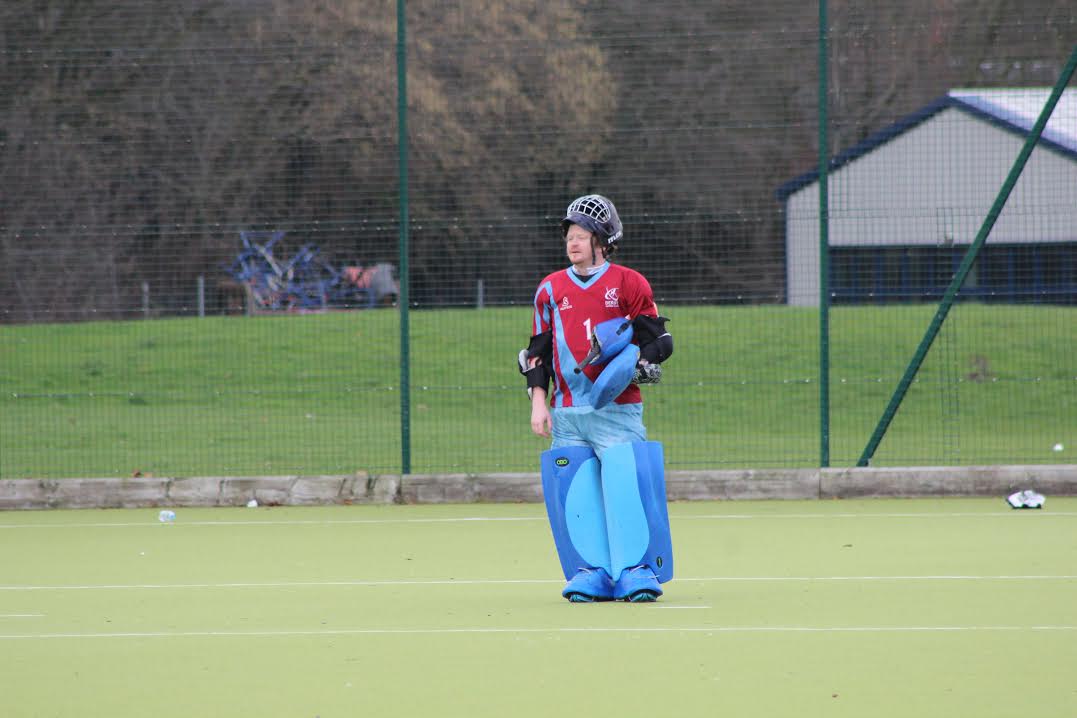 When we speak, on the 30-day countdown, he can run up to ten miles comfortably. Mileage has also been accrued in his kit – but only around the pitches of Derby HC, his local club. As April 23 looms, he is now going to his local gym and using the machines in full kit.

Derby is Murphy’s eighth club in all. He admits to having trouble remembering exact dates, memory loss being one of the side effects of his medication. He does, however, remember when he started to play the sport, aged 15 at Crewe Vagrants. He was even playing in the same badgers and 3rd XI as current England international Henry Weir.

After university and a variety of clubs in his twenties, he stopped playing for 18 months before coming back three seasons ago. After more match day travelling, he eventually took the decision to join Derby, just a mile down the road from his house.

“The aim was not to take it seriously,” he says. But 12 months later he was made first team captain. The confidence came swooping back, both on and off the pitch. He has since used his captaincy to influence the side, yet he admits: “I don’t want to sugarcoat it, it has been absolute hell at times.”

“But stepping over that white line is a great escape – especially as a goalkeeper,” he says. “There is nothing else to focus on, other than keeping the ball out of the net.”

With dual responsibilities, captaincy has thus been a struggle for him. “When you’re suffering from anxiety and you get a phone call from a player saying they can’t make it, those have been serious moments. There have been times when I’ve felt lost on the pitch.”

But the season run-in has sparked a change. His organisational skills that come with captaincy have improved. So too has his hockey, focus and enjoyment.

Meanwhile, he has agreed to carry on as skipper next season as well, while he’s also been nominated as club person of the year. After all, he is fully ensconced in Sunday tournaments, Friday juniors, is captain of the newly installed mixed side and handles the club’s social media.

In darker periods, he admits that some medication has made him quite aggressive at times. He reflects back to an East Midlands Division 1 match, when a weakened Derby side were 3-0 down at Newark before being awarded a late penalty flick. 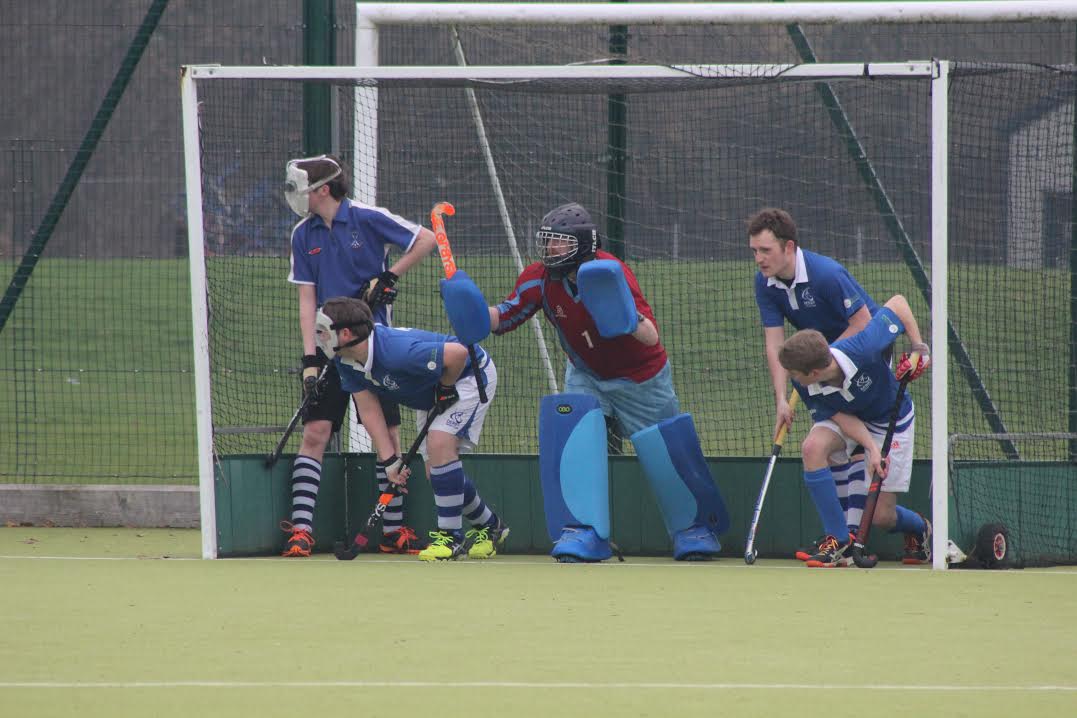 He had felt tired all match. He didn’t watch the flick and had put his goalie smock over his head. All he wanted to do really was get off the pitch. He told himself that if he didn’t hear the umpire signal a goal, he would sub himself off. “That was a particularly low moment for me. It was that realisation that hockey used to be my escape. It didn’t matter what happened during the week.”

There have been other low times, too. The 300-mile round trips – the long car journeys in the expansive North Divisions – and a red card a few seasons ago when he was sidelined for 30 days for a vocal outburst, despite being deliberately hit in the chest. “I reacted completely inappropriately. On the flip side it made me realise how much of a miss hockey can be. I learned my lesson and haven’t had a card since.”

He is as open on his illness as he is when writing on the field hockey forum where he first raised his condition in 2011. And reading some of the posts, it is also evident how many other posters have also suffered from mental health issues.

The partial anonymity of the forum allows people to speak more freely, which hasn’t been the case in speaking to friends and family.

Murphy says: “It’s almost like a highlight, a horrible one though, as it means that other people are suffering. From some of the responses, I’ve had two to three hundred pounds in donations from people I barely know. It really is quite a thing.”

Away from the forums, there there have been several high points during Murphy’s well-travelled career. “Standing and knowing that I had made the Midlands Premier Division with Harborne,” he states. “I had reached a point knowing that if I won that, I would be playing in the National League.” He adds of that period: “You are playing with some of the best in the country and you say to yourself ‘you can do this, you can play at this level.”

And then there’s last season in the dying seconds against Panthers HC, of Leicester, when Derby were 1-0 up and their rivals won a penalty corner on the final whistle. Murphy takes up the story: “We had the players waiting to come on for the game afterwards and several supporters there too.

“As the guy hit it, it was straight and coming down my right side, but our number one runner had deflected it high. As I dived, I kept my hand high and gloved it over the bar.” Cue cheers and the final whistle. “That is pretty much the dream move for a GK,” he says.

Murphy will now hope to avoid the dreaded aches and cramps and move as freely as he can over the Marathon course. He has yet to decide if he will wear the full kit, complete with padded shorts and abdominal guard, although he has been advised against it due to the severe rubbing.

All the same, having a unique outfit and hockey stick will certainly mark him out from the rest of the runners. With the GB women’s gold and hockey’s kudos, he will surely gain some attention from the BBC cameras, too.

“I would welcome people wanting to have a chat, to give me that little bit extra if I’m struggling,” he admits. “I’m all for it. But I don’t think I can go all the way, in hockey terms, and have a snakebite and black!”

Murphy will no doubt drink in the crowd’s emotion instead, as he sets about conquering both his illness and this heroic challenge. We can only admire his honesty. 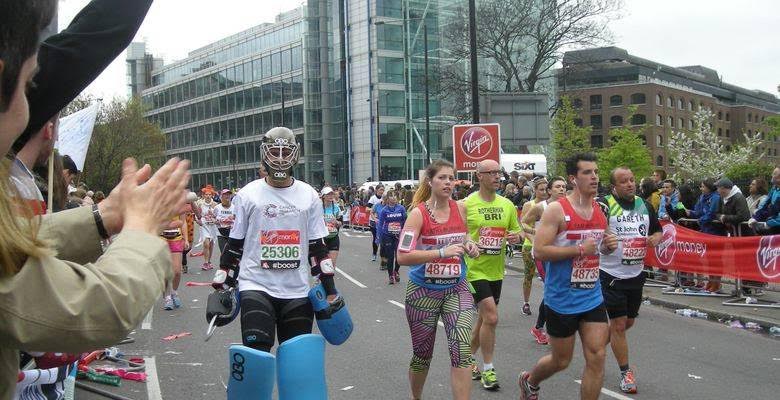 The Derby HC goalkeeper will follow in the footsteps of Michael Fernando, who completed the 2015 London Marathon in his hockey goalkeeper kit after losing bet with a friend. The former Oxford graduate ran in honour of his father, who passed away shortly before his running feat. He finished in a time of 5hrs 45mins 02secs.