Crowned the world’s best goalkeeper for a second year running, David Harte says it is an achievement he “had never imagined possible”.

Part of that is probably because, until he started secondary school, hockey had never even crossed his path.

“The Big Man” was raised in Kinsale in the deep south-west of Ireland, a heartland of indigenous sports like hurling and Gaelic football.

The family heritage was steeped in those local sports; his father Kieran played at the top level for Co Tyrone, reaching provincial football championship finals. His cousin, Mickey, is one of the most decorated GAA managers of all time, also with Tyrone.

With that grounding, he admits that “it gets pretty hectic come All-Ireland time” and he was not initially destined for a life in hockey and certainly not between the posts.

Indeed, his twin brother Conor – now a sweeper with Racing Club de Bruxelles and Ireland – was initially the one to take up the last line of defence.

“Conor used to be in goal and I was the long-legged midfielder, loping around,” he said of his memories with the Courcey Rovers club in Ballinspittle where he had his beginnings in sport. Hockey came aged 13 in secondary school, the one outpost in the wild countryside of west Cork that played the sport at the time.

After a brief spell outfield, he quickly move to grab the pads.

“When I did take up hockey in Bandon Grammar, I tried outfield but didn’t like all the rules and the complications.

“I could kick a football and had good hand-eye co-ordination from other sports like badminton and tennis and tried combine it all! I put on the pads for one game back in first year against our arch rivals Ashton. I only had one save to make but got that rush and, pardon the pun, I was hooked.”

His natural dexterity combined with an imposing physique, sprouting to his 6’5’’ frame, quickly saw him earn places in the Cork Harlequins club first team and underage representative panels. He also won the All-Ireland Schoolboys championship, the first of many major titles

A scholarship at University in Dublin followed and his debut for Ireland came in 2006 aged 18. It came under coach David Passmore on the same day as his twin Conor, just five years since taking up the game.

David regularly drew on his father’s experiences at this time, something that helped him align his focus.

“Whether it is watching soccer, hockey or GAA on the TV, we will always have that mutual appreciation towards goalkeepers across all disciplines.

“I can remember calling him, upset and disappointed as a young keeper having lost a club game in front of maybe 100 spectators due to what I considered a fault of mine.

“I heard then how he had conceded a goal that he misjudged in front of 30,000 spectators in an Ulster final. It was safe to say that put things into perspective. We talked about how he reacted and how mentally resilient he was which I really admired!”

Through those conversations, part of the Irish national team’s recent psyche comes through.

In the lead-up to the Olympic Games, Ireland were left £25,000 short in funding to run the programme they wanted to maximise their potential.

Harte was at the forefront of declaring a “no excuses” mantra for the squad, not allowing their financial plight become a reason for lesser performance. They finished above their ranking in 10th with Harte captaining the side to Ireland’s first Games since 1908.

There has also been a thirst for continuous improvement. College took him to Dublin where he linked up with Pembroke, the dominant force at the time.

He arrived with a strong reputation but was joining the club of Nigel Henderson, a former Irish captain between the posts, who he initially would be trying to oust from the first team. 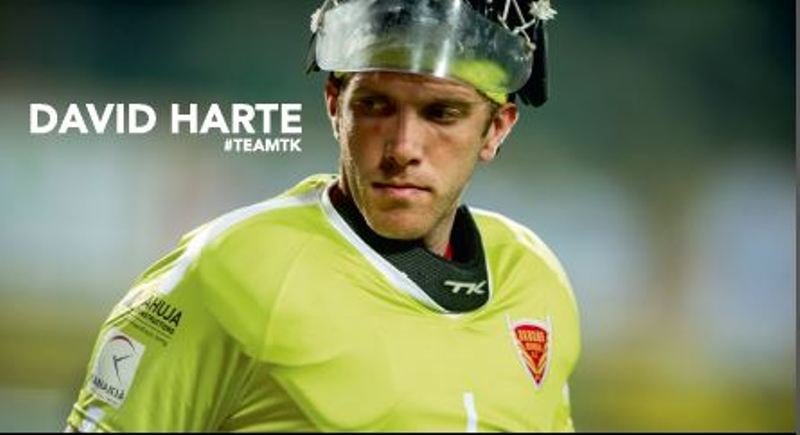 The grizzled veteran, though, would prove a crucial foil for the precociously talented teenager. They remain master and pupil to this day with Henderson the national goalkeeper coach.

“He was an idol of mine naturally growing up and he continues to have a huge impact on my career. Apart from the technical and tactical aspects of being a goalkeeper, he is big into the mental side.

“That area, in particular, is something I learned so much about starting as an 18-year-old boy in my first year in Pembroke. I couldn’t have had a better person as a teammate and mentor – though I must admit it was strange challenging him for a starting spot come the weekend.

“Nidge combined with Craig Fulton [his club coach with Pembroke] were the perfect combination to allow me learn and grow into international hockey.”

With Pembroke, he won every domestic title as well as a EuroHockey Club Champions Trophy. His reputation was growing, particularly after a brilliant set of saves against Rot Weiss Koln in the Euro Hockey League KO16 in 2010.

It earned a move to SCHC in the Netherlands and, subsequently, to SV Kampong. In Utrecht, he encountered his other key goalkeeping mentor, Martijn Drijver, whose technical expertise as raising his level to its current level.

Numerous personal awards followed at World League Round 2 in 2013 in Delhi and the Champions Challenge in 2014 in Malaysia, helping him earn an ongoing Hockey India League deal in Mumbai.

The year it exploded for Harte and Irish hockey was 2015. His miraculous last-minute save against Pakistan in Antwerp earned a 1-0 win at the World League semi-final that played a pivotal role in Olympic qualification.

Last year brought Euro Hockey League gold with Kampong and some fine performances for the Green Machine in Rio. Indeed, despite Ireland finishing away from the medals, they stood out enough for him to take his second FIH gong, voted on by the public, his peers and coaches.

“It is an unbelievable feeling and one that I had never even imagined possible, especially it being an Olympic year! You can definitely say it is special having fellow players voting along with coaches too, making me appreciate it even more.”

*This article originally featured in The Hockey Paper, which is available every Wednesday.