My Life In Hockey: Simon Mason 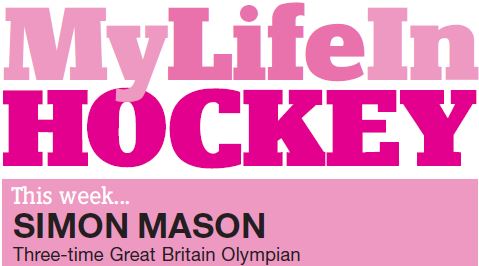 The first time I got called up for international duty I actually had to turn it down!

I got the call in 1993 to play in a Test series against Germany due to injuries, but I had exams and I had to miss the trip – I was worried I’d never get the chance again.

But in my final year of university in Leeds, I went over to Pakistan for the 1994 Champions Trophy, as David Luckes got injured.

I came in as a naive 21-year-old and I still think I just got a bit lucky as everything hit me, but form as a goalkeeper helps, so I went to the World Cup that December as No.1 and we came fifth. It all spiralled from there.

That first time you pull the GB shirt on is surreal; we were still pre-lottery and amateur at this point.

But I am a patriotic man and I remember singing the national anthem. The whole emotional journey of going there with your mates was fantastic.

I had a fortuitous introduction to the game, but it wasn’t until I was 11 and moved to Katharine Lady Berkeley’s School in the West Country that I picked up a stick.

I’d had to appeal to get into the school, so the headmaster knew exactly who I was, and it happened to be John Law who was also the manager of the England under-16s.

Boys’ hockey wasn’t part of the curriculum but John asked me to join the team. For a year-and-a-half I was probably the worst right-winger anybody had ever seen – I looked like a drunk baby giraffe on ice!

That didn’t really work out for me, so I moved from right-wing to right-midfield, to right-half, and finally to right-back before John gave me the choice of giving up or going in goal.

I was picked for the west divisional team after ten weeks between the sticks and it all just went from there. I was lucky to be largely injury-free throughout my career, and my longevity was down to Luckes as much as anything.

We would push each other extremely hard but had a brilliant working relationship where if one got picked, the other would be wholly supportive.

Going to the Olympics as an event was mind-blowing but from a playing perspective my memories aren’t that fond. We just weren’t good enough. The other teams were beyond us so the Olympics were frustrating, especially Athens.

My playing highlight came in 2003 when I won the European Cup with Reading – my personal club highlight – and then England got bronze at the EuroHockey champs.

I had an amazing run of form and was voted the best goalie in the world, and went to Athens thinking we could medal. But the semi-final dream died within two games.

I played two more seasons at Reading after my international retirement before joining Ian Jennings at Guildford for another six or seven years there. We are still together at Indian Gymkhana – although this season is proving challenging!

I still love goalkeeping, but just as much I enjoy running about like a madman outfielder in masters hockey.

Being involved with the athlete committee for London 2012 though was probably one of my all-time highlights in sport – it was a privilege.

I was part of the presentation party when Hannah Cockroft won her gold on the Super Saturday night.

Having never had my golden moment, to stand a metre from a champion with 80,000 people singing the anthem is something I will cherish forever.