An exciting new addition to the hockey world arrives on November 16 with the publication of The Hockey Paper, the first weekly newspaper dedicated to hockey.

The Hockey Paper will present a unique package of information, ranging from breaking news stories, in-depth interviews, analysis and gossip.

The Hockey Paper will cover all matches played in the men’s and women’s Premier Divisions with extensive round-ups of the six Conferences below. It will also report on hockey action throughout Europe and the wider world. 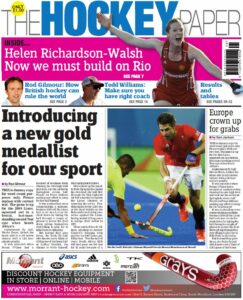 There will be big interviews with star players, special features on grass roots, universities and schools as well as an extensive results and fixtures section.

The Hockey Paper comes from the same proven stable that publishes The Rugby Paper, The Cricket Paper, The Golf Paper, The Non-League Paper and The Football League Paper.

The paper will be a 32-page all-colour tabloid, printed by Newsquest at Oxford and distributed by Associated Newspapers for sale in UK newsagents and supermarkets every Wednesday morning at £1.50.

Editor-in-chief David Emery, former head of sport at Express Newspapers, said: “This is a thrilling time for hockey fans in the UK after the success in the Rio Olympics. We believe The Hockey Paper can tap into that interest and reflect the ever-growing status of the game.”