Sam Quek: We ran in together ahead of Dutch shoot-out and said ‘yes, we’ve got this’ 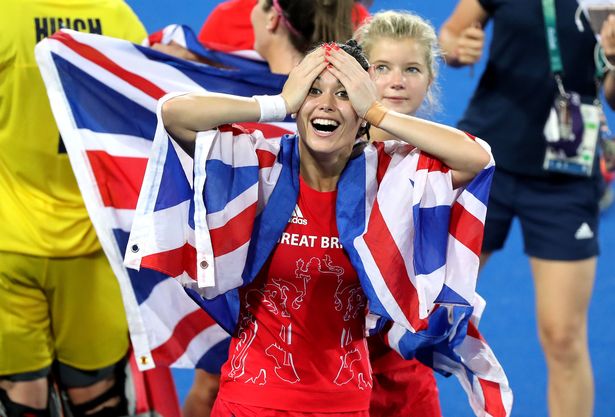 Defenders Hollie Webb and Sam Quek both withstood a barrage of attacks from the Netherlands in normal time, which finished 3-3, before the former slapped home the winner in a dramatic shoot-out on Friday evening.

Having savoured victory as an England side in last summer’s EuroHockey Championships against the Oranje, which also went to the 23 metre line, the Great Britain players knew instantly that gold was within their sights as the hooter sounded for the thrilling denouement.

“You could tell it was the first thing the Dutch were thinking about,” Quek told a small group of reporters at the athletes’ village. “We ran in together and said ‘yes, we’ve got this’. To feed that back was such a powerful thing which has been with us throughout.”

Webb, who plays at Surbiton, was one of nine possible shooters and “didn’t know I was going to be taking it.” She then “blocked everything out” to deliver a record eighth successive win for the team and the Netherlands’ first Olympic defeat since 2004.

Britain’s success also ended Richardson-Walsh’s 17-year international career, as well as for inspirational wife Helen, with Rio marking the first time a gay married couple had competed at the Olympics.

Having captained England and GB since 2003, an injury and motivational issues in 2013 left Richardson-Walsh contemplating retirement.

Following a poor World Cup, the couple went travelling after England’s silver at the 2014 Commonwealth Games.

As far as UK Sport, the elite funding body, was concerned, Richardson-Walsh had quit and a retirement fund was already in place to pursue life after hockey.

Following her U-turn, she undertook development squad training to earn her place back. The same month, she was awarded an MBE for services to hockey before a unanimous vote to keep her captain.

The decision to end her international career on Friday night was spurred by a trip to Amsterdam at Easter to visit her sister, Rachel. The couple agreed shortly afterwards to join leading club side HC Bloemendaal on a two-year deal.

Helen, 34, will complete her Open University psychologically degree while Kate will begin her first forays into coaching.

“Kate is a one off, there will not be another leader like her,” said Quek. “Whoever is going to step into those shoes, it will be a challenge.”

Asked whether the squad had acquired extra leverage being an all-female group on an unbeaten run in Rio, Webb said: “We wouldn’t necessarily be best friends outside hockey as we all have different personalities. But it’s so special how we have all worked together and are so close.”

It was just left for Quek to break into a smile at the thought of Kate carrying the Team GB flag at the closing ceremony tonight.

The Holcombe defender said: “She absolutely deserves it. She gives so much to our sport and to our country in everything she does I would love to see her carry out the flag.”