Khawaja Junaid: Where to for Pakistan hockey? 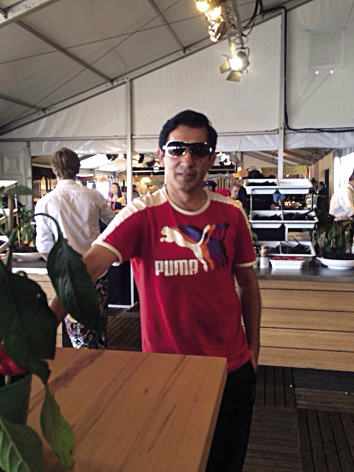 Khawaja Junaid was in the Hague for the World Cup, his country wasn’t. World Cup gold medallist and Olympic bronze medallist Junaid played for Pakistan from 1987-1995. The great left-half was player of tournament when Pakistan last won the Champions Trophy in 1994. He was also selected in the world team announced after Pakistan won the World Cup in that same year, writes Ijaz Chaudhry.

Junaid was in The Hague to attend the coaching course run on the sidelines of the World Cup. And, here, he talks about the current state of hockey in his country plus his views about the 2014 World Cup itself.

Junaid was born in a hockey family. His father Khawaja Aslam played in the 1952 Olympics while his elder brothers, the twins, Awais and Bilal were junior internationals, winning bronze in the 1982 junior World Cup. A sister is also a Pakistan international. Junaid has also coached with Pakistani teams many times.

“The first thing I saw and felt in my household was sports, primarily hockey,” says Junaid. “Right from my adolescent days, we heard and read about Pakistan hockey’s remarkable successes. I consider myself very lucky to have had a hockey environment all around me.

“Father introduced all of us, brothers and sisters, to hockey at an early age. I vividly remember the huge receptions in honour of Pakistan’s victorious sides of the 1982 World Cup and the 1984 Olympics. All this made me dream to be a part of such a squad. Players of that era like Hasan Sardar, Manzoor Junior and Naeem Akhtar, among others, were my heroes. In those golden days, Pakistan only went for number one – finishing second at the World Cup or the Olympics meant nothing.

“I made my international debut in 1987 but became a regular in the national team in 1989. In the 1990 World Cup, in my home town Lahore, we unfortunately lost the final, which was played before a crowd of 70,000.

“That bunch of players reached the peak at the 1992 Olympics. Pakistan were among the favourites, but when we won all our pool games we became the hot favourites. In the semi-finals, Pakistan lost to the eventual champions Germany after dominating most of the time. The bronze medal was a scant consolation as I always yearned for the gold.

“Finally, my childhood dream got fulfilled in 1994. After winning the Champions Trophy in Lahore, Pakistan regained the World Cup in Sydney. We were given a hero’s welcome on return home and were also well rewarded.”

“Since 1995, Pakistan hockey has undergone a continuous decline. First, we slipped out of the top four. A few years later, Pakistan was out of the Champions Trophy. Then the 2010 World Cup saw greenshirts in last position and now the failure to even qualify… Unbelievable – a national tragedy.

“There are a multitude of reasons. Schools and colleges used to be the hockey nurseries. Presently, there is hardly any activity at educational institutions. Likewise, the number of clubs has also greatly reduced.

Again, this is due to a number of factors –the lack of success at international level plus popularity of cricket and now soccer, in the latter case due to the cable TV which covers big leagues of Europe. Most of the schools that have mushroomed in recent times have small buildings without proper [sports]grounds.

“In my time, the possibility of a permanent job via hockey was a great attraction for young players and their parents alike. The [government] departments like PIA [Pakistan International Airlines], customs, and banks recruited players for their hockey teams. Many departments have either abolished hockey teams or employ players only on a contract basis.

“Then the management of the national teams is changed very frequently. The coaches are not given a reasonable run. Therefore, the players remain confused as they have to adapt to different coaches’ approaches.

“To climb back, Pakistan hockey has to address all these issues – bottom to top. At the same time, one must admit that the other international teams especially the Europeans and the Australians have progressed in technical terms. Hockey is now a science. We have declined and they have improved. In this World Cup, the three Asian teams finished among the last four.

“I had come to The Hague primarily to attend a coaching course held alongside the World Cup. Many people I met expressed sorrow over Pakistan’s absence. Even before I landed here, former Australian great Jay Stacy, on the connecting flight from Dubai, expressed regret about Pakistan’s decline and we discussed the issue a lot. During the course, two fellow attendants, British and a Dutch, remarked, ‘the World Cup is incomplete without Pakistan’. Another old acquaintance felt ‘the charm is not here.’

“Leaving aside all this, I had a wonderful time at the World Cup. The standard of the game displayed was excellent – worthy of the sport’s premier tournament. The Australians seem to have given a new dimension to the game of hockey. And it was nice to see the new forces doing so well especially the Argentinians. The Belgians are also here to stay. All this augurs well for the sport.

“Some moments such as the [Mark] Knowles’ [to Kieran Govers aerial] goal will remain etched in one’s memory.”