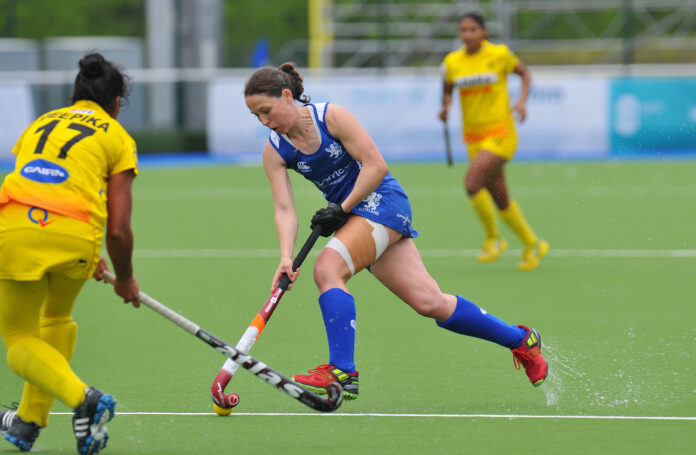 After finishing seventh in Delhi four years ago, Scotland ladies have openly set a target of a top-four finish at Glasgow 2014. And with the squad of 16 that coach Gordon Shepherd has selected, it is definitely achievable, writes Andrew Lovat.

Indeed, if all the months of full-time training really do pay off, and with the performances they’re capable of, a medal – realistically, the colour of bronze – is a possibility. But it is going to be tough, with two real medal favourites in their group – World Cup finalists Australia and an England side who’ll be out to improve on their poor World Cup.

The squad of 18 selected for the Champions Challenge in Glasgow at the start of May, was a serious indication of the players Shepherd had in mind for his final 16 to play in front of the home crowd at Glasgow 2014. And after a disappointing seventh place finish there, despite some great team performances in front of an enthusiastic home support, that’s the squad he’s stuck to. The two casualties being defender Rebecca Merchant and second-choice keeper Nicola Cochrane (she will be a reserve at Glasgow 2014).

However, sentiment had already been thrown out the window before the Champions Challenge anyway, with no places for Samantha Judge (player/coach – Edinburgh University) and Holly Cram (Clydesdale Western) – both veterans of many a campaign including Delhi 2010. After not making the Champions Challenge squad, it was always going to be so tough for 34-year-old Judge and 30-year-old Cram to regain the places they’d held for so many years and make the Commonwealth squad – albeit Cram has been picked as a reserve for Glasgow 2014.

Defender Kareena Marshall – so long the “face of Scottish Hockey” at many a press/photo call, alongside brother and fellow Scotland international William Marshall – didn’t make the Champions Challenge squad either, and subsequently hasn’t made the final 16 for Glasgow 2014. However, Marshall (player/coach – Western Wildcats) had most likely prepared herself for the massive disappointment anyway, as she’d been carrying an injury for a number of weeks, which took her out of contention for one of those 16 prized places. Then there’s 22-year-old Alison Howie (Clydesdale Western) who’s been such a great talent and an emerging star in the last couple of years. Only last August she was selected to go to the Euros in Belgium, and now, just under a year later, she has only made it as a reserve for the Games in her home city. Such disappointment for her, but she will be determined to get past the severity of it all and get herself back into the squad for the future.

So, what about the players who have made the final squad for Glasgow 2014. Well, for four of the 16 selected – Ailsa Wylie (Grove Menzieshill), Aileen Davis (Clifton), Becky Ward (Dundee Wanderers) and Sarah Robertson (Edinburgh University) – it’s an absolute triumph. It must have been heart-breaking for all four after they didn’t make the European Championships in Belgium last August, and with a long domestic season starting a few weeks later, it would have felt like a long road back to get themselves re-established in the national squad. But they’ve done it; and for the oldest out of the four, forward Ailsa Wylie, who has nearly 150 caps, it has been months of hard work, grit and determination that has seen her force her way back into a highly competitive squad that has a number of younger and newer players. Wylie had a fantastic Champions Challenge tournament at the start of May and that ultimately sealed selection for her.

The rest of the squad is a mixture of highly experienced players from Delhi 2010 and before, plus players that have been selected for Scotland in the last couple of years. The most capped woman player in the history of the Scottish game, and captain of the squad, Linda Clement (Grove Menzieshill), will lead her team out alongside vice-captain Catriona Ralph (Clydesdale Western). Clement is a prolific goal scorer, particularly at close range, and is always a threat. In defence alongside Ralph is fellow Clydesdale Western player Susan McGilveray who has been in top form in recent months in her club and national shirts. Leigh Fawcett (Grove Menzieshill), who has just gained her 100th cap, continues to be as consistent as ever – rarely does the feisty, hardworking defender play anything else but superbly, and will be an important part of a well organised squad.

GB selectee and Old Loughtonians goalkeeper, Amy Gibson, is back between the posts after being out for a few months injured. It will be a big relief for her, and it’s a huge relief for Scotland that she’s back fit again, as she was fantastic at the Euros last summer in Antwerp.

Looking to midfield and there’s a wealth of experience between GB player and London 2012 bronze medallist winner Emily Maguire (Reading) and ex-GB player Vikki Bunce (Dundee Wanderers). Maguire and Bunce – once they got into their stride – were brilliant at the Euros last August and have kept that standard going since then. Scotland may have come seventh in the recent Champions Challenge, but incorporated within some good team performances, Maguire and Bunce were arguably two of the best players throughout the whole tournament. Also in midfield are Clydesdale Western players Morag McLellan and Nicola Skrastin. McLellan has just recently broken her thumb but should be fit to start come the first game. And then there’s the set-piece specialist – Canterbury’s Nikki Kidd. Kidd has scored countless drag-flick penalty corners in recent years at club and international level – and she’ll be hoping it all comes right for her during the Commonwealth Games.

Joining Linda Clement, Ailsa Wylie and Sarah Robertson up front will be the superfast, old-style winger Alison Bell (Grove Menzieshill) and target woman, Canterbury’s Nikki Lloyd. Bell’s runs down the right flank are a joy to watch and she creates so many chances with her hard-hit crosses. Nikki Lloyd, who was first selected for her country only two years ago, is a strong presence in any opposition circle, and satisfying her hunger for goals, of which she scores many, is her one and only mission it seems.

Scotland have definitely had their ups and downs in recent years. Their performances in the recent Champions Challenge in Glasgow epitomised that. They can be poor, sometimes – just not gelling as a team. And then they can be outstanding, with everything fitting into place with brilliant performances all round and plenty of goals being scored. When they are outstanding it’s down to the hard work they’ve put into their full-time training and the many personal sacrifices that have been made along the way.

When they’re poor on the playing field, they’ll come off at the end of any given game and quickly pick themselves up as a unit – a unit that genuinely has a great spirit within.

There will have been some hard choices and hard decisions to make, but overall, it’s fair to say that Shepherd has picked the strongest squad possible.

Scotland’s group of Australia, England, Wales and Malaysia will of course be no pushover for the Scots – but if they do perform as well as they can, they’ll be confident of going through and possibly getting that top four finish they strive for, in front of those home fans.

Share
Facebook
Twitter
WhatsApp
Linkedin
Print
Previous articleMaddie Hinch not stumped by this cricket test
Next articleThere is a sense you are part of a greater team: Wales hockey’s Huw Jones