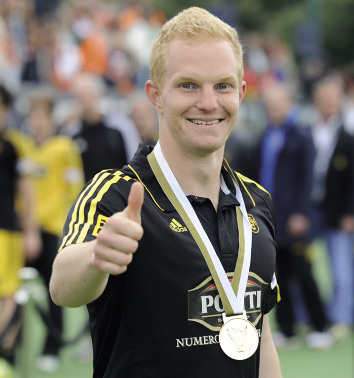 While England’s club’s wiped out at the last-16 stage of the Euro Hockey League (EHL), at least there was some national representation on the podium with former Loughborough Student and Bowdon player Richie Dawson-Smith a key member of the German THC Harvestehuder side that won the EHL title.

And the former England U21 international went on the complete a perfect season with his Hamburg club side, going on the take the German Bundesliga championship a fortnight later.

“It has all been a bit crazy, but it has been fantastic,” Dawson-Smith told PUSH. Celebrations for the dual titles included a balcony appearance at Hamburg’s city hall – the Rathaus – a spot once graced by Kevin Keegan after SV Hamburg won the Bundesliga back in the big-perm era of 1979.

“It was really quite something to be invited up there,” continued the defender. “The club was in the second league in Germany four years ago. That made it all mean even more to the players and everyone involved. We are all so proud to have been part of making that happen.”

One of the highlights for TV viewers of the EHL campaign was coach Christoph Bechmann’s half-time dressing room speech, given when his side trailed RC Bruxelles 2-0 in the semi-final.

We’ve no idea what he said, and we aren’t the only ones, but it did the trick. Harvestehuder surged back to win 3-2. They then went on to defeat hosts Oranje Zwart in the final on a shootout, after a 2-2 game, on Easter Monday.

“When Christoph get’s going he’s a bit too fast for me,” said Dawson-Smith who is learning German and will return to Harvestehuder as they defend their dual titles. “I couldn’t translate it word-for-word but you just get inspired. We just needed to play our game, create chances, get corners and make opportunities for ourselves.”

The German championships, hosted by local rivals UHC Hamburg on the May 3-5, also had their tense moments. Harvestehuder defeated UHC via an old-school strokes shootout on the Saturday after a 2-2 draw. But the following day’s final was a more emphatic 5-1 defeat of Rot Weiss Koln.

“The only way to finish off the season was to win that as well,” said Dawson-Smith whose parents were at both the EHL and German finals. “The championship was the goal for the whole season. It is the one thing that every German side wants to do.

“When the final whistle went I was a bit stunned, to be honest. It is amazing to think we are all in the club’s history books now. The pennant we won is up in the clubhouse and it will be there forever.”

There was history of a less positive nature for Englsh clubs in the EHL with no representatives in the quarter finals after Reading lost 4-2 to Real Club de Polo, Beeston lost 4-3 to Waterloo Ducks and Surbiton lost 3-1 to OZ.

The drop-off in England’s club performances since Reading achieved a third place in 2010-2011 season means England will now have only two places in the 2014-15 EHL – so Surbiton who finished third in the domestic championships, miss out on Europe

See the video at www.ehlhockey.tv/video/sounds-of-the-ehl-harvestehuder-thc-rc-bruxelles

How can Hockey Remain Relevant in the Modern-Day Era?