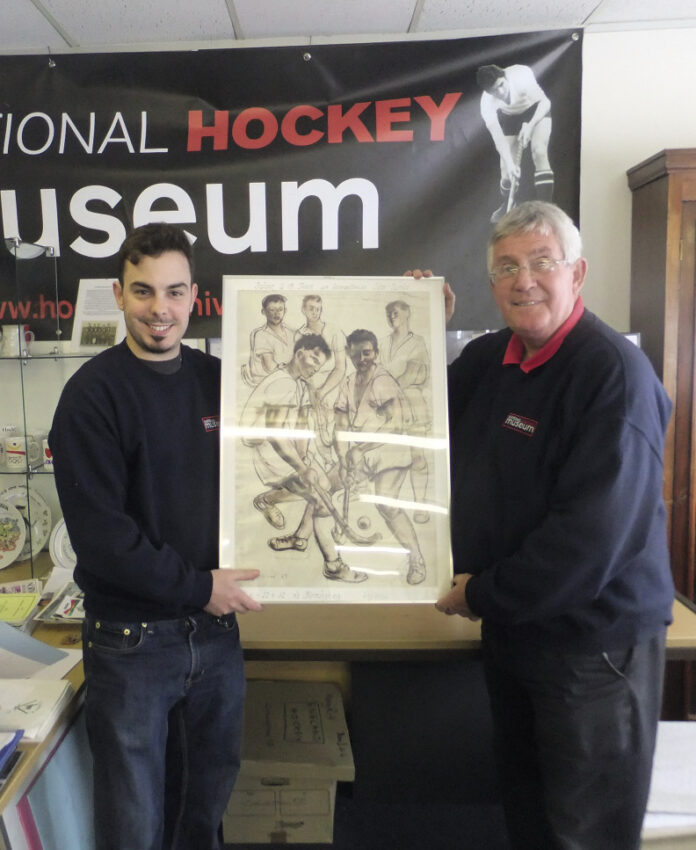 Our researches into hockey’s history are very wide ranging and we try to follow up the leads that we hear of. When Kate Billson lodged the records of the England Schoolboys Hockey Association (ESHA) with us it was another important piece of the jigsaw puzzle that is hockey. The schoolboys association no longer exists as all junior hockey comes under the aegis of England Hockey. Thankfully though Kate had kept the records safe and now they are part of the national collection.

When Kate handed over the records she mentioned a painting that was presented to the ESHA in 1992 by the Swiss hockey association. It was given as a thank-you for them being allowed to participate in the international schoolboys tournament held at Cannock that year. As the ESHA had no clubhouse or home, the painting was left in the safekeeping of Cannock.

There it stayed for many years until a visiting Swiss player noticed it hanging over the bar. He spoke to Laurie Alcock (affectionately known as Mr Cannock!) and told him that it was an original painting by a very well known Swiss artist and was very valuable.

Here the story is like the Antiques Road Show where someone has lived with an item all their life, is told that it is worth a fortune, so locks it away. Laurie felt that the Cannock clubhouse was perhaps not quite secure enough so he took it to the stadium at Milton Keynes for safe keeping. There it hung in the office for a few more years until everything went rather pear shaped with the Hockey Association.

So, the last known site of the painting was on a wall in the office of the stadium that had been demolished! All manner of enquiries came to naught. The situation was not helped by the fact that nobody had an illustration of the painting. We had some vague descriptions but nothing to help us identify it.

As a last resort we contacted Swiss Hockey. We did not tell them we could not locate the painting as that might have offended so we asked them if they could give us some information about the artist and so on. They came back to us with an excellent file telling us that the artist, Hans Erni, is still alive at the grand old age of 105. They also sent us an image of the (missing) painting and one other hockey subject that he had done.

When we looked at the image we were shocked. We had this picture after all but it was in our ‘prints’ section, not with our ‘originals’ and we have not yet catalogued our prints. We quickly took it out of its frame to check and found that alas, it is a print. Further information from the Swiss Hockey revealed that the original is with HC Rotweiss Wettingen in the German speaking part of Switzerland.

It was an interesting piece of sleuthing and maybe with a good outcome. If we had found an original painting, which apparently could be worth £100,000, would we have felt safe to keep it anywhere other than in a vault? The print we can show to anyone and it now has great story to go with it.

Share
Facebook
Twitter
WhatsApp
Linkedin
Print
Previous articleGaynor Nash: Now that the party’s over … rigor mortis sets in
Next articleHockey Issues looks at reaction to coverage of the 2014 World Cup