England Hockey in turmoil: Coach Jason Lee stands down on eve of Games 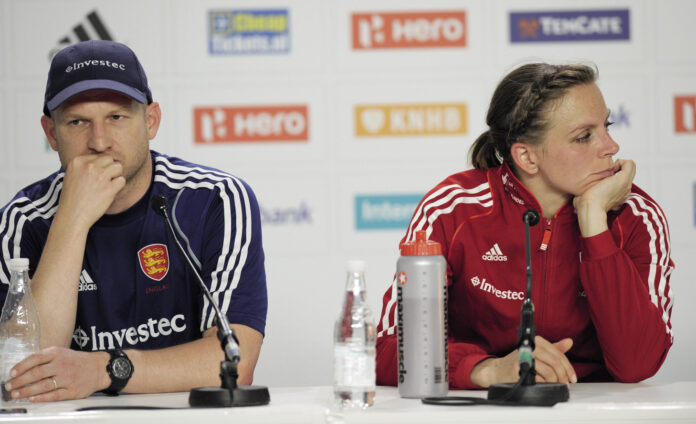 England women’s preparations for the Commonwealth Games have been thrown into disarray with coach Jason Lee leaving his post less than four weeks before the start of the Glasgow tournament.

Described as being by “mutual consent” on June 30, in the modern parlance by England Hockey, the separation leaves former coach, and current England performance director Danny Kerry in charge of the side for Glasgow 2014.

News of Lee’s departure broke barely a fortnight after England’s poor 11th-place finish at the World Cup in the Hague.

The blame has clearly not fallen on the players – a number of whom were well below par in the Hague tournament. Lee is the only major change to the line-up for Glasgow.

The cull of 18 players to 16 would have seen one of the goalkeepers left out in any case. Maddie Hinch retains the jersey and Kirsty Mackay misses out. The three other casualties are Ashleigh Ball, who has a knee injury, and London 2012 veterans Hannah Macleod and Sally Walton.

The two incomers are debutant Lucy Wood and Giselle Ansley who, as a defender, is pretty much a straight swap for Walton. That defensive choice could well have come down to Ansley’s corner prowess – sadly missing in the World Cup – and her future potential.

The forward line did not fire in the Hague, and England have gone for a bolt-from-the-blue selection in uncapped 20-year-old Holcombe forward Wood, presumably at Macleod’s expense.

But in the wake of the poor all-round performance, and with England having a 20+ training group, there have been remarkably few player changes.

In the Hague, Lee described the situation as “the worst it has ever been” in his coaching career after successive defeats to USA (2-1) and China (3-0) left one of the pre-tournament medal hopefuls floundering in the lower-reaches of the rankings.

Confidence was shot and the results just got worse. A 4-1 loss to South Africa was followed by a 2-1 defeat to Argentina. A slight rally came with a 3-1 win over Germany and a shootout win in the 11/12 playoff game against Belgium, after a 1-1 draw. It was however a dreadful return for one of the best-funded and most professional squads in the Hague.

Before the tournament there was no reason to expect the wheels would fall off so spectacularly. Lee had come into the England women’s job in February 2013, after taking the GB men’s squad to a fourth-place finish at the London 2012 Olympic Games. In the other post-London change-ups, Danny Kerry, having taken GB women to bronze, moved from women’s coach to director of performance.

The transition appeared seamless. 2013 delivered World Cup qualification, a silver medal in the European championships in August, then a bronze-medal win in the World League finals, defeating Argentina on their own turf, in December.

The world ranking was three, the squad was a stable mixture of old hands and promising newcomers – 2014 looked full of promise.

Lee was, however, on a learning curve. Before news of his demise broke, the coach had discussed the adjustments he had had to make to his coaching with the move from men’s to women’s coaching after ten years in charge of Great Britain and England’s men.

He admitted his first coaching session with the women’s squad provided a stark and fascinating contrast. “I saw the girls down one end of the training pitch as I was setting up some cones and they were behaving just like my wife behaves,” Lee reflected. “All the things that I find interesting and frustrating about my wife, I quickly realised it’s not just her; it’s the whole female gender.

“It’s very different. With the guys you set up the training pitch, you tell them what to do, they go and warm up and then begin the session that you’ve described.

“With the girls, you go through the same process – and they actually value the explanation much more than the men – but if you leave them to their own devices, they’ll just stand and chat.

“They’re so motivated as a gender, unlike men, to create empathy and work on their emotional relationships with each other. That’s a real driver for them.

“Because relationships are so much more important to them, I spend a lot more time chatting to them and, I’d say, as a consequence I’m closer to them than I was to the men.

“It’s an emotional rollercoaster. They’re generally much more upbeat, but their emotions come up and down, whereas the blokes are fairly stable, cynical and grumpy.

“There are things that any male coach working with women has to recognise. It’s like any male-female relationship. What a man wants to do is provide solutions, when actually, with girls, it’s most important to show understanding, concern and care.”

That emotional rollercoaster came crashing down at the 2014 World Cup. After being ambushed by a well-drilled USA side in the first game and a bit of bad luck against China, the side’s confidence evaporated.

Looking for explanations, it can be said there was some emotional baggage carried into the Hague. Captain Kate Richardson-Walsh was visibly upset in a BBC interview when asked about the non-selection of her partner Helen Richardson-Walsh for the event. Also, Kate Richardson-Walsh’s announcement that this would be her international season threw another variable into the mix – although she says this did not affect the performances.

Baggage or no baggage, however, that a side with eight Olympic medallists with a coach who played in two Games and coached at three could fall to pieces so dramatically was truly shocking.

Lee said in a press conference at the tournament that one of the things he would be considering was his attitude to the team, and what effect that was having on them. He will no longer have the chance to do that.

Lee’s media persona is one of admirable frankness – maintained throughout at the Hague – and a dry humour. He creates the impression of being pragmatic and level headed and of taking both defeats and successes as opportunities to learn and develop.

His coaching track-record is strong – ninth at Athens (2004), fifth in Beijing and fourth in London – the latter two GB’s best finishes since gold in 1988. He also took England to their only ever European championship win, in 2009.

All those were with men’s teams, however, and in Lee’s first in-the-spotlight women’s event with high expectations, something went badly wrong.

That seems a fair assumption given that England and Lee have parted company in the six-week gap between the World Cup and Commonwealth Games. Just waiting until after Glasgow would have given some breathing room – the Champions Trophy in late November the next entry in the international calendar.

There must, however, have been some sort of major bust up for a coach, who has led a side to two medals in the last year, to leave after one poor fortnight.

In terms of the way forward, the new, old coach, Kerry produced a side good enough to medal in an Olympic Games – although there was, at times, frustration at an over-structured and un-creative approach to attacking play.

Kerry also put a lot of emphasis on the emotional bonds within the squad. And there is no doubt he produced a very resilient team. This resilience showed in some impressive bounce-backs after semi-final losses. Foremost of these, for England, was defeating Germany 2-0 for bronze in the 2010 World Cup after losing a semi-final on strokes to the Dutch following an epic 1-1 draw. Kate Walsh, as she then was, was one of the many in tears after that semi-final, as was she after GB’s 2-1 London 2012 Olympic semi-final loss to Argentina. The subsequent 3-1 defeat of New Zealand for Olympic bronze was a victory built on emotional solidarity.

It is possible, however, to criticise Kerry for being too emotional a coach. There are times for cold, hard logic and he, for one, seemed a shattered man after London – he had ridden the emotional roller coaster, heart-and-soul, for seven years and there was nothing left.

Kerry has, however, bounced back himself since then, revelling in his performance director role. Now he is faced with quickly rebuilding the side’s lost resilience, developed over that seven-year-period on the touch line. He has only a few weeks to re-make the team which Lee said was “broken” in the Hague.

England face a far from an easy start, with Wales gunning for an opening-day upset. If the goals don’t go in early for England there, that fragile confidence will be tested to the full.