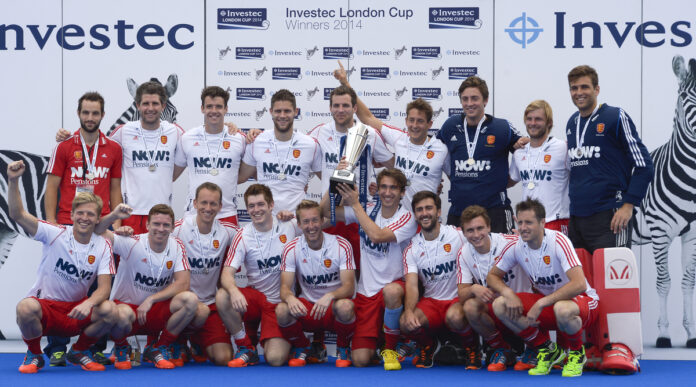 England won both the men’s and women’s hockey titles at the Investec London Cup in the new Lee Valley Hockey and Tennis Centre, Queen Elizabeth Olympic Park, on Sunday.

The only cloud over the double win is an injury scare for midfielder Nick Catlin ahead of the Commonwealth Games in Glasgow.

The men’s final went to a shootout after a 2-2 draw between England and Ireland, with England taking the decider 4-2. The women’s final was also a close-run affair with England edging out South Africa 2-1.

The men’s final started brightly with England scoring in the sixth minute through Alastair Brogdon who finished after a run along the base line from Adam Dixon.

Ireland equalised in the 36th minute when a blocked cross fell perfectly for Eugene Magee who smashed the ball past George Pinner.

In the 49th minute England took their advantage back when a wide attack found David Condon in space and he was able to fire a shot through a crowded circle past David Harte in the Ireland goal. However, the game was far from over and, as England’s defence failed to clear an awkward ball, Michael Darling capitalised and scored the equaliser to draw the scores level at 2-2 in the 69th minute.

In the shoot-out, Pinner kept out Michael Watt then Magee while Ashley Jackson, Barry Middleton, Harry Martin and Simon Mantell were on target for England..

Player of the tournament and top goal-scorer Ashley Jackson said: “It’s great to be on a new home ground, which hopefully we’ll be able to make into a fortress in the coming years. Thanks to all the spectators too, the support was fantastic and we hope to see everyone many more times here. It’s important to play games ahead of big tournaments and as the week went we couldn’t have asked for anything better.”

Catlin did not play in the final following a thigh injury in Saturday’s game, further assessment will be made on the injury over the course of the following week before the teams head up to Glasgow for the Commonwealth Games.

England were also on the scoreboard early in the women’s final with Nicola White scoring in the third minute with a deflection on a corner flick from Sam Quek.

South Africa pressure paid off, however, with Jade Mayne netting in the 16th minute.

Going into the second half, England again won the first penalty corner and came close through Susannah Townsend after she hit the post with a deflection ofKate Richardson-Walsh’s sweep into the circle. England created several more chances, but were unable to breakthrough South Africa’s solid defence.

The winner came with six minutes to go. Lily Owsley won a penalty corner that was slipped left to Sam Quek who slotted it home to take the decisive lead.

In the last five minutes both teams had chances, with the most notable being England’s Sophie Bray hitting the cross bar in the 64th minute.