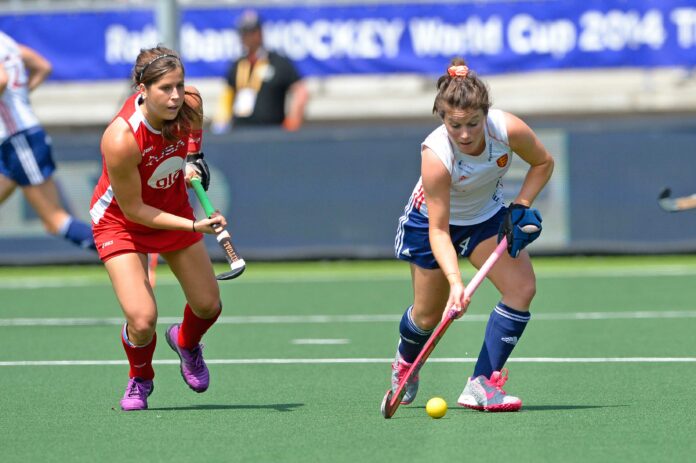 The Reinprecht sisters were in the thick of things again as USA completed an undefeated passage through to the semi-finals of the 2014 hockey World Cup with a 4-2 win over South Africa today.

Midfielder Katie scored a vital goal to take USA back to a 2-1 lead in the 39th minute after the African champions had rallied to equalise just three minutes earlier. Reinprecht senior, 24, fearlessly slid onto a Caroline Nichols slapped corner to score.

Her younger sister Julia, also put in a strong performance in defence, although she took a deflected ball to the head in the second half.

“Moments on the field like that today when she is bleeding, I have extra concern because she is my sister,” said Katie. “But it is awesome to have someone who always has my back and is my best friend on the field with me at all times.

“We have pretty much played [field hockey] together all of our lives. I played soccer for a while but she was mainly field hockey, then I eventually joined back and we played high school, college and now on the US team together.”

Also on target for the USA during the match were Nichols herself (PC, 35mins), Lauren Crandall (PS, 45mins) and Rachel Dawson (PC, 56), as their set pieces continued to fire. At the end of the game the wounded Reinprecht warmed down with the team and jogged over to the crowd to thank the fans.

“Our parents are here to support us too, so that is pretty special as well,” said Katie. “We are so lucky we have a ton of support back home from family and friends, but we have also touched people that we might not even know. It is really nice to get feedback from back home anyway we can – social media, phone calls, texts. It has been really awesome.”

“It will be the biggest game I have ever played in, even going to the Olympic Games. A medal is on the line; it doesn’t get much bigger than that.”