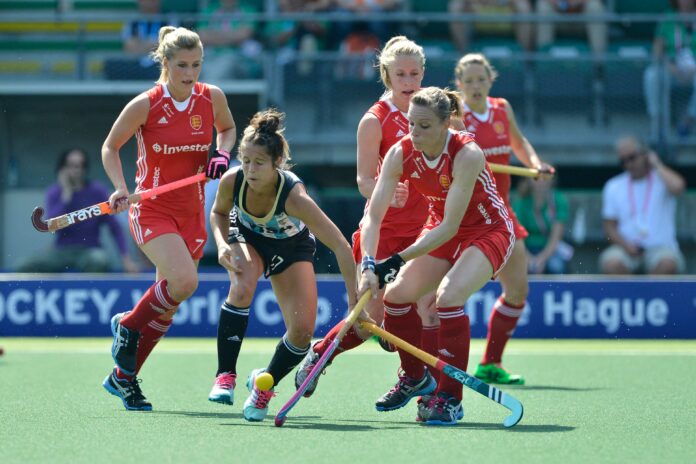 England put in a much improved performance in their penultimate pool game of the hockey World Cup but their abject string of results continued as they conceded a winner to Argentina after the final hooter.

Sunday’s game stood at 1-1 for all of the second half until Las Leonas’ Carla Rebecchi smuggled in a corner after the final hooter. England skipper Kate Walsh turned away the first shot from Noel Barrionuevo but the rebound eventually found Rebecchi at the right post.

The original corner had been awarded, on video appeal, for a foot in the circle. The first took Walsh on the body and it was re-taken.

“From the start they showed they are quality hockey players and they can be a great team,” said England coach Jason Lee. “But it does feel like we are due a bit of luck – the corner was at least debateable.”

Through out the game Argentina, missing start midfielder Luciana Aymar struggled to find their rhythm and the world champions found themselves unexpectedly behind to a Alex Danson corner goal in the seventh minute.

Kate Walsh slipped the ball back to injector Susie Gilbert whose shot was smothered by Las Leonas keeper Belen Succi. Georgie Twigg shovelled the rebound goal-wards and Danson was waiting by the right post.

It was only England’s second goal of the tournament, in their fourth game.

Argentina equalised rather too easily when a mis-trap in the circle eventually found Delfina Merino by the right post in the 27th minute.

England midfielder Susie Gilbert said: “We are obviously absolutely gutted about the result but everyone gave everything in that game for 70 minutes. Everyone put everything out there. We were strong on the ball, diligent on the ball, we took them on and then we were just so defensively strong which really showed.

“We have really stuck together as a team, as a unit, and we hve really helped each other along wherever we can as individuals and as a team. I think that really showed today – we are a great team and that unity really showed in today’s performance.

“We take all the positives out of that and take it to Germany.”

England, still win no points, play Germany on Tuesday at 4pm local (3pm UK). To avoid the 11/12th play-off England must overhaul South Africa who are three points ahead with a five-goal better goal difference.

South Africa play USA at 10am. If South Africa lose, England will know by how many goals they must beat Germany to avoid the last-place game and finish at best ninth.