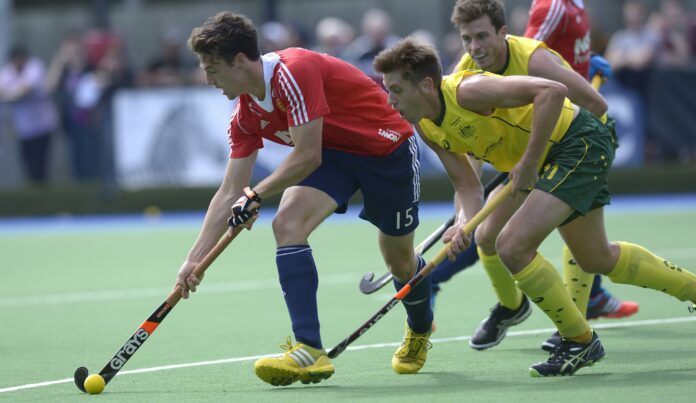 Australia completed a two-nil series win over England, taking the second game of the series 3-1 at Bisham Abbey on Sunday.

The sides next meet on Saturday June 7 in a pool A game at the hockey World Cup in the Hague. See here for a full schedule.

England coach Bobby Crutchley said: “Over the two games I’ve been generally happy with what we have produced, however the last half of hockey was disappointing. We didn’t put enough pressure on Australia and when you allow them to dictate the game it’s always going to be an uphill battle.”

Roper broke the deadlock on 27 minutes. Nick Catlin had forged his way down the right side to the byline before slipping the ball back to to the Wimbledon striker who scored to the keeper’s near post from two yards out.

Australia pulled level from open play, Kieran Govers scoring on 49 minutes after he took a ball at the top of the circle and, having been given too much space, smashed the ball into the corner to pull his side level.

Govers was on target again on 56 minutes – this time from a penalty corner, from which he flicked home into the bottom corner, to the left of goalkeeper George Pinner.

And another penalty corner made it 3-1 to Australia, Chris Ciriello scoring his second in as many games with a shot to Pinner’s right corner.