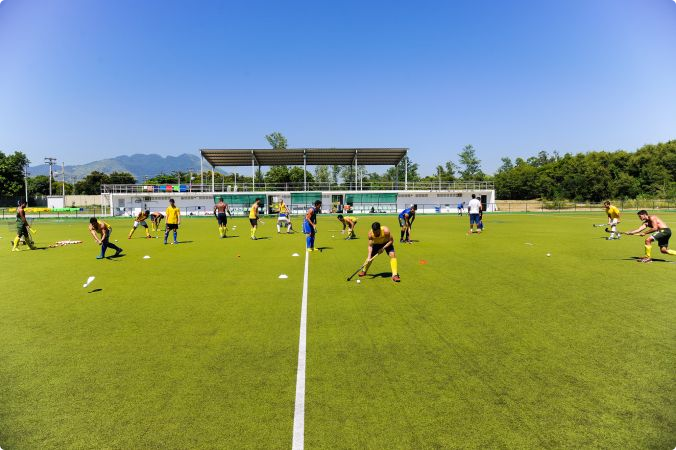 The International Hockey Federation (FIH) has come away from a three-day visit to Rio reassured that progress is being made with preparations for the 2016 Olympic Games.

The FIH delegation, which included CEO Kelly Fairweather, director of sport David Luckes and executive board member Alberto Budeisky, visited the site of the 2016 Olympic Games hockey venue in Deodoro and met with members of Rio 2016, the Empresa Olimpica Municipal (EOM) and the Federal Government.

Among the topics discussed to progress the detailed operational planning were the competition venue, test event, competition schedule, accommodation, training venue and ticketing.

Fairweather said: “Overall the message we are giving is very positive. We have seen a sense of urgency and momentum building here which is quite comforting. I think they´ve demonstrated a lot of progress so that was really positive from our point of view. I went to sleep last night feeling very positive.

“We had a key meeting around Deodoro, which has obviously been a subject that has been debated quite a lot over the past few months. We received a detailed presentation on the cluster operations from the head of venue management for Deodoro and I must say that was quite comforting because we got a lot more detail which gave us a really good idea of the flows and how the different client management services will operate during Games time.

“We then zoomed in on the hockey venue and spent a lot of time talking about the plans which we had reviewed in detail. We had many questions which we went through one by one and 95% of them were answered, so I think we´ve made some really good progress. The key now is to get people on the ground, in particular the pitch provider to oversee operations and start construction as soon as possible.”

Fairweather was keen to highlight the important role played by the government partners in cooperation with Rio 2016: “We had a really good meeting with the EOM alongside the Federal Government and Rio 2016. Joaquim Monteiro, the new President of the EOM, was very open, receptive and supportive. We had the right people in the room together and that was fantastic. The spirit of cooperation was really positive and it´s clear they are all right behind this project and it´s now a question of putting bricks and mortar in place.”

The delegation also visited the Federal University (UFRJ) which will provide the Games training venue and inspected the accommodation for technical officials. Following the 2016 Games the Deodoro hockey venue will provide an important legacy facility to help develop the sport in Brazil.

Commenting on the legacy for hockey in Brazil, Fairweather added: “In terms of legacy we are really very pleased because we are going to have a great legacy at Deodoro, which is going to be where the national team is based. And we are also going to have a great legacy at the Federal University which has something like 50,000 students. Hockey traditionally has always had a strong base in universities, so we think it is a very good thing.”