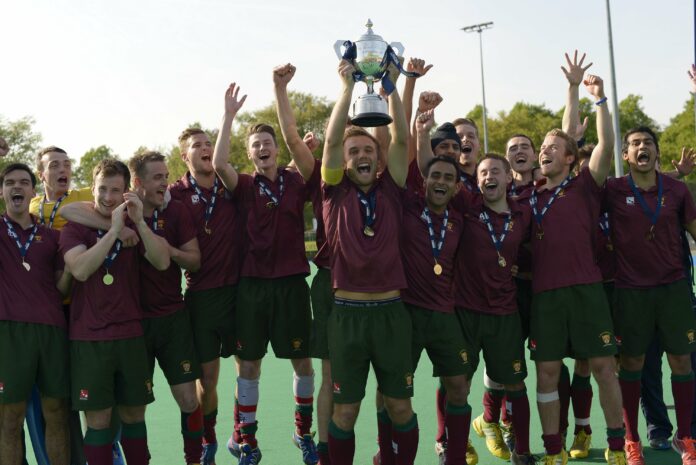 Cannock ended their season on a high to win the NOW: Pensions men’s cup for the first time since 2007 on Penalty Strokes against Brooklands MU.

The game started with a fast tempo and the score was already 1-1 after just three minutes. Cannock took the early initiative, with David Beckett on hand to steer the ball home after good play from Arjan Drayton Chana.

This lead only lasted a minute as Brooklands MU bounced straight back. David Flanagan showed his initiative to take a sideline ball early and played a pinpoint ball across the area where Peter Cornell superbly slid the ball past Patrick Smith in the Cannock goal.

Brooklands started to get a grip on the game and went close through two Penalty Corners, while Cannock’s Nick Bandurak just missed the target at the other end with a shot on the reverse.

It was Cannock that were to score next as they retook the lead through Ben Edge, who was on hand to strike the ball home from a goalmouth scramble after good build up play. Brooklands then had the golden chance to level again when they were awarded a penalty stroke; with a defending stick preventing a clear goal scoring opportunity after a penalty corner was saved.

However, Peter Flanagan’s stroke came off the post as Cannock remained in the lead. Cannock’s Peter Jackson went close up the other end from another Penalty Corner but it was all square again on 32 minutes. Aidan Khares played the ball into David Flanagan who from a tight angle lifted the ball over Smith into the roof of the net.

The second half didn’t quite live up to the expectation of the first with little being created in the first ten minutes. Cannock’s Arjan Drayton Chana was put through on goal on 44 minutes but Chris Scott was alert in the Brooklands goal to prevent the danger. An even 10 minutes followed with neither team taking control before Cannock twice went close, first through a penalty corner that was well saved and then an Andrew Appleton strike that sailed over the bar.

Kav Jabbal won Brooklands first penalty corner of the half on 59 minutes but the well organised Cannock defence prevented a shot. The match sprung to life in the remaining five minutes with both teams having chances to win the game. Patrick Smith saved well from a David Flanagan shot before Cannock broke and had three chances in quick succession, all kept out by the excellent Chris Scott. Cannock pushed for the winner but were unable to find one as the match went to penalty strokes.

In the stroke competition, Cannock kept their nerve to convert all five of their flicks. When Aidan Khares saw his stroke go over the bar, it was down to David Beckett to win the Cup for Cannock. Beckett neatly slotted the ball away to start the Cannock celebrations as they lifted the cup for the fifth time.

Guernsey (pictured above) put the last two years of hurt behind them as they lifted the NOW: Pensions men’s trophy on penalty strokes in a thrilling game against Banbury.

Guernsey came racing out of the blocks in the first half showing they meant business after losing out the previous two years and dominated the earlier stages. They received two Penalty Corners in the first five minutes but came across Scott Reynolds in the Banbury goal on fine form. However, they didn’t have to wait long for the breakthrough from their third Penalty Corner, with Tim Ravenscroft smashing the ball home. Guernsey continued to press but had to wait until 15 minutes to double their lead, when Zak Damarell played in Matt Watson after a defensive error who tapped the ball home. Banbury started to get more of a grip on game but came against a well organised Guernsey defence and had to wait until the 27th minute for their first Penalty Corner, which Harry Loxton hit wide on the reverse. Loxton had another shot saved just after as Banbury piled on the pressure and they got back in the game on 32 minutes through Barney Williams. Guernsey responded positively to this and immediately increased their lead, this time through Sam Dawes who was on hand to deflect a Matt Watson shot over the keeper.

It was well and truly a game of two halves with Banbury doing exactly what Guernsey had done to them in the first half. Just after Kyle White had his shot fly pass the post from their first Penalty Corner, Banbury reduced the deficit back to one when George Brooker was on hand to tap the ball home after a goalmouth scramble. And it was all level just 11 minutes into the second half when Kyle White dragged Banbury’s third Penalty Corner of the half through the keeper. The next ten minutes was all Banbury and they had a goal disallowed on 54 minutes. This brought Guernsey back to life and they had their first chance of the half through Matt Watson after being played through by Andy Whalley but Reynolds was once again on hand to make a fantastic save. The remaining ten minutes was a tense affair but neither side were able to find a breakthrough, with Whalley going close for Guensey and Loxton having a shot saved in the final two minutes.

The match therefore went to Penalty Strokes. The first four penalties were scored, with Banbury’s third coming off the bar. Ben Cormack converted Guernseys third and Jake Le Marchant was on hand to save Banbury’s fourth stroke. The game was won when Matt Watson scored from the spot to send the Channel Islanders into wild celebrations after finally getting their hands on the Trophy.

The first action of the game came on three minutes when Basingstoke won a Penalty Corner and although the ball ended up in the net, an offence had already been committed by the defender. Camberley & Farnborough responded positively and were awarded their first penalty corner on six minutes, with Simon Needham having his shot blocked. Basingstoke edged the majority of the first half and went close through Grant Rouse, David Stones and Graham Lang. However, it was Camberley & Farnborough that would go into the break ahead. Todd Hutcheson and Andrew Smith combined to draw a fantastic save from Adam Smith, but from the same attack Hutcheson and Smith combined once more with the latter slotting the ball into an empty net.

Camberley & Farnborough had the chance to double this lead in the first minute of the second half but Smith was on hand to pull off another fine save. This proved to be vital as Basingstoke went straight down the other end to equalise through Daniel Bowden who lifted the ball over the advancing keeper after Grant Rouse played the ball into the D. Basingstoke had an unconverted penalty corner just before Camberley retook the lead with Simon Needham striking an unstoppable shot from a Corner past the keeper. It didn’t take Basingstoke long to get back on terms, with Ben Shaughnessy keeping his calm to convert a penalty stroke after a defending foot prevented the ball from going in. The next 15 minutes was a tight affair with neither team creating many chances as the defences stood firm. It was however a defensive error that lead to the winning goal when Todd Hutcheson (pictured above) intercepted a back line pass to run through and slot the ball under the keeper. Basingstoke pushed for an equaliser and had two penalty corners in the final five minutes but were unable to score as Camberley & Farnborough held on for victory.