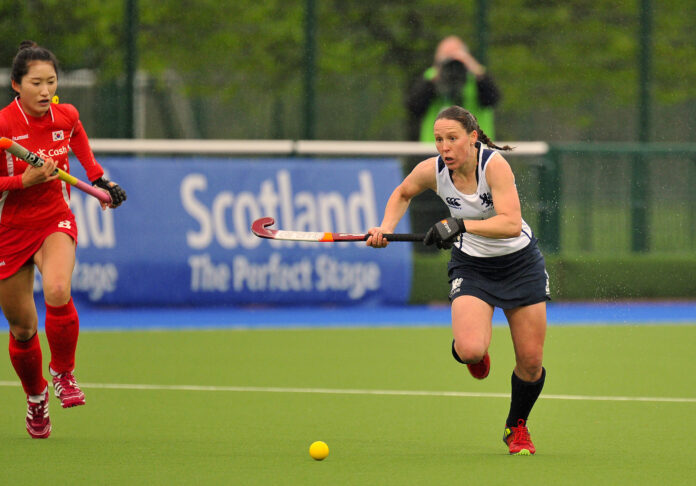 Scotland produced one of their best hockey results in recent years to secure a 2-2 draw against Korea in the Champions Challenge in Glasgow this afternoon.

Two goals either side of half-time from Scotland captain Linda Clement gave the home side hope of a small upset against the team ranked number seven in the world, but a field goal from Ju Ok Kim and a penalty corner from Eun Jong Kim ensured a share of the spoils for Korea at full-time.

Scotland will now play South Africa in tomorrow’s quarter-final match (6pm) at the Glasgow National Hockey Centre after finishing third in pool A behind Korea and Belgium.

Scotland coach Gordon Shepherd said: “I’m happy with the result. The players played well and took the game to the Koreans when we needed to and at the right times, earning a lead from it.

“It was a great position to be in, especially against a team ranked seventh in the world. Korea are going to the World Cup in a few weeks and we knew we’d have to defend well. I thought every single player was great in that respect.

“We took points off a team ranked higher than us and we’re improving all the time. We asked the players to play with confidence and it showed. We have to keep that belief in ourselves and this team could achieve a lot more.”

The hosts responded shortly after, Vikki Bunce creating an opportunity for vice-captain Catriona Ralph to force another good save from Lee.

Scottish goalkeeper Nicki Cochrane was then called into action in the 15th minute, racing out from her goal to block Korean captain Eun Jong Kim’s low drive.

However, the Edinburgh University shot-stopper couldn’t prevent the Koreans from taking the lead two minutes later; Ju Ok Kim’s attempt on goal was blocked by a combination of Cochrane and Morag McLellan but Kim was quick to seize the opportunity and flick the resulting re-bound into the net.

Scotland were back on level terms shortly before the half-time interval though after they were awarded a penalty corner in the 30th minute for a foot inside the circle. The Scots brilliantly executed a pre-planned set-play, defender Susan McGilveray receiving a switch pass and firing the ball into the circle for Clement to scoop the ball past Lee to make it 1-1 going into the break.

Korea started the second half strongly, controlling possession and creating opportunities in front of the Scotland goal.

In the 42nd minute, Seul Cheon fired a drag-flick just wide of the right hand post, before Cochrane produced a great save to deny Eun John Kim with a save high to her right hand side.

Cochrane once again produced a splendid stop in the 45th minute, frustrating Jin Hye Cho after a her goal-bound attempt was diverted to safety.

Four minutes later, the national side took a 2-1 lead to the delight of the home support; Bunce won possession deep in the Korea half and her cross was met by Clement at the back post, the skipper diving to crash the ball past Lee.

Korea responded moments later, Cochrane keeping her side in front with fantastic saves from Eun Jong Kim and Ju Ok Kim. A point blank save from Eunji Cho was a particular highlight in the 53rd minute.

Unfortunately, the pressure finally told in the 58th minute after Scotland were penalised for an illegal foot inside the circle. Eun Jong Kim’s powerful drag-flick from a penalty corner finally beat Cochrane to put the scores level at 2-2.

Further chances fell for the tournament favourites to snatch a win before the full-time hooter, but Cochrane underlined her brilliant individual performance to keep out reverse stick attempts from Bi Eun Cheon and Mihyun Park, the match finishing all square.