Glenn Turner: Ready to ‘give it a good shot again’ 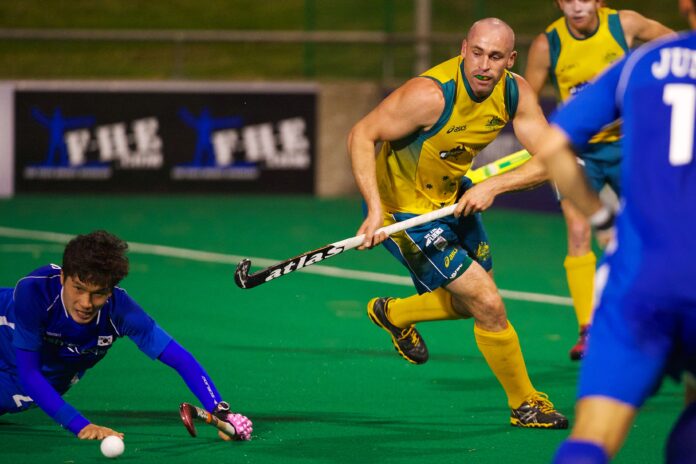 If  a pub bet had gone the other way Aussie forward Glenn Turner might have played rugby league rather than hockey. And when the 2014 World Cup comes around, there will be a few defenders wishing Turner had never picked up a stick.

The striker with the rugby league physique announced himself on the international scene at the last World Cup, netting five goals with a bullocking, hard-hitting and skilful performance in New Delhi.

Roll forward four years and Turner is an established member of the Kookaburras line up, having added an Olympic bronze medal and a World League silver to the gold medal he picked up in India.

“It will be a different experience for me, this time” the 29-year-old tells Push. “Last time I was pretty new to the team, so it was a big effort to get there,” he says. “This year will be a bit different – with more experience. But there is still competition for places. We have such a good depth in our system that anyone in the group can make it. Whoever gets picked, we will be taking our best side and hopefully give it a good shot again.”

And as for giving it that shot, Turner knows first hand the World Cup is an unforgiving tournament. Australia lost their opener in Delhi 3-2 to England, leaving them with a mountain to climb.

“The beauty of the World Cup and the Olympics is that winning them is so hard,” he says. “You can go in with absolutely the best preparation but you are going to play against teams that have put in just as much effort.

“It is just a case of, on the day, who can win the one-percenters and create the better chances or finish better. There are such small margins between the top teams, in particular.”

in 2010, Australia had their revenge on England, going on to twin their pool on a massive goal-difference advantage. They then defeated the Netherlands 2-1 in the semi-final – with Turner scoring Australia’s second. a 2-1 final defeat of Germany brought the World Cup back to Australia for the first time since London, 1986.

“Delhi was a great experience,” says Turner. “We lost that first game and then we knew we had to win every other game. To come through and win the way we did is something I will never forget.”

But back to that pub bet. Turner explains: “My dad played football [rugby league]. My best mate, who lived across the road, his dad played hockey. They’d play their different sports then go to the pub together, have a few beers than walk home. They thought it would be easier if they played the same sport

“They must have had a few drinks and had a bet they decided whichever team finished higher in the ladder that year, they’d both play that sport – and obviously their families would play too.

Turner still has the occasional hankering for a game of rugby league and he remains a fanatical South Sydney Rabbitohs supporter – the club his grandfather played for in the 1950s. But with hockey World Cup and Olympic medals already in bag, he has no regrets.

“I did play a bit of football but nothing serious,” he says. “A few years ago, just before I made the Australian team, I played for a pub team in my town – I had a call from a coach and was told get my priorities in order! Sometimes I think it would have been nice to have a few more games, with my family being such big football supporters, but I wouldn’t give up having won the World Cup and been to the Olympics – I would choose that any day of the week!”

Having played in the Hockey India League and World League finals in India, Turner was rested for Australia’s major pre-World Cup tournament – the Sultan Azlan Shah Cup, which the Kookaburras won for an unprecedented eighth time.

“A lot of the overseas players came into the Hockey India League straight from the World League, which in hindsight probably wasn’t the best [scheduling].

“Some days you play, travel the next day and you might be stuck at an airport for a few hours then play the day after. It is definitely difficult but every team is in the same situation. It is a learning experience for everyone, but for me in the second year I knew what to expect.”

Turner’s own form in the league was exceptional netting seven goals in a tournament where he often took on a more midfield role. However, his second year in the league wasn’t as successful as he would have hoped, with the Uttar Pradesh Wizards side he skippered failing to make the semi-finals. But he is now convinced that India will benefit from the league in the long-term.

“It was definitely a higher standard of hockey this year,” he says. “There were a few hiccups from the first year that were sorted out and the teams were definitely more professional. We did some testing, fitness and a bit more gelling together before we started. That made a big difference to the quality of hockey. Plus, having that first-year experience, it all ran just a bit smoother.

“Last year you saw great individual play, but this year it was a lot more structured and coaching came into it a lot more.

“When I was over there I made a lot of comments about the Indian strikers. The young Indian forwards coming through are playing more like international players now – not just hitting it in and hoping for a corner or running to the corner and smacking it across the circle.

“The young guys are really stepping up and scoring some sharp goals around the net. They are getting in there and diving and working hard, rather than just hoping. There is a marked improvement and that will make India a lot stronger in the future.”

For the time being, there really isn’t much chance for Turner to put his feet up, despite being officially ‘rested’.

“‘Rest’ is a funny one,” he says, “You aren’t playing but you are working really hard. For me it’s about keeping my body right and making sure I peak at the right time which is the end of May.

“Our pool is very tough with teams like Belgium – the way they have been playing lately they can beat any team and they will be pushing for a medal,” Turner says.

“You never know how India turn up – they can play a great game or they could get on the back foot and it could blow up. Every time I have played them, even when we have won by a margin, they have always been very tough games.”

And that is with barely a mention for England, who Australia are due to face in one of the matches of the tournament – an epic Ashes battle set for the main stadium on the second Saturday of the World Cup.

“The major priority is the World Cup as it is every four years, and that is what everyone is working towards,” Turner says.

“After that, priorities change a little bit and we will start worrying about the Commonwealth Games. But at this stage, all the focus is on the World Cup and it has been for a while.”