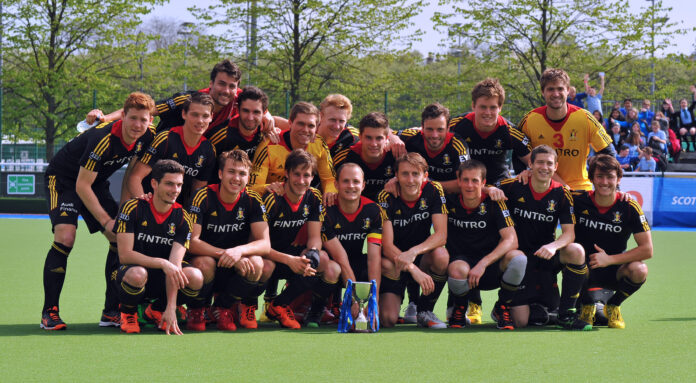 Belgium were crowned the winners of the men’s Four Nations hockey tournament  in Glasgow on Tuesday after a dramatic final against Argentina went to a shootout following a 2-2 draw.

First half goals from Loick Luypaert (6’) and Tom Boon (22’) had given Belgium a 2-0 lead early on, but Gonazlo Peillat pulled one back for the Argentinians on the stroke of half time (35’). An equalising goal from Augustin Mazzilli in the 44th minute ensured the contest would go to the sudden death shoot-out.

The Belgians then held their nerve to run out 3-0 winners in the shoot-out, the Argentines missing all their three efforts on goal.

Meanwhile, Scotland were soundly beaten 5-1 by England in the second international match of the day.

Ashley Jackson gave the away side an early lead, scoring with a trademark drag-flick high into the roof of the net in the seventh minute.

Scotland goalkeeper Jamie Cachia was then called upon to make a series of saves to keep the home side’s interest in the match; the first to deny Mark Gleghorne from a penalty corner, before denying Simon Mantell’s effort after great play from Alistair Brogdon.

Tom Carson’s penalty corner was then blocked by the Scotland shot-stopper, with Brogdon thwarted yet again by Cachia after a good combination with Nick Catlin.

England were not denied for much longer though; an excellent counter-attack involving passes between Jackson and Iain Lewers led to Tom Condon diving low to claim the visitors’ second goal in the 22nd minute.

Phil Roper went close to extending England’s lead three minutes later after a good cross from Gleghorne, but Condon was on the mark again in the 27th minute, stealing in behind the Scottish defence to turn home a third English goal after Cachia had blocked Catlin’s shot on target.

Six minutes before half-time, Mantell’s excellent surge and subsequent pass into the circle deflected back off a Scottish defender’s stick back into the Reading midfielder’s path for him to slide in and slot the fourth goal into the net.

The early stages of the second half featured little chances in front of goal, but Lee Morton finally worked James Bailey in the England goal, his reverse stick shot beaten away by the Reading stopper.

Midway through the half, Cachia pulled off another good stop from a Gleghorne attempt from a penalty corner.

Scotland finally registered on the scoresheet two minutes from time, Wei Adams flicking home Iain Scholefield’s pass to give the home support something to cheer.

However, it was England who rounded off the scoring only sixty seconds later, Brogdon breaking into the circle to send a reverse stick shot past Cachia to make the final score 5-1.

Following the match Scotland captain Chris Grassick said: “It was a difficult match, we were four or five players down from the previous matches. It was a really good effort from the guys who came into the team, it was our fifth match in seven days as well so it was a decent effort.

“We just said at half-time that it’s 0-0, we needed to go out and give a good account of ourselves. We’re a bit disappointed with the last goal but we showed good fight in the second half.

“We only started our programme three weeks ago while the teams here have been in preparation for the World Cup for months. I’m sure there will be a real confidence about the group after three months training before the Commonwealth Games.”