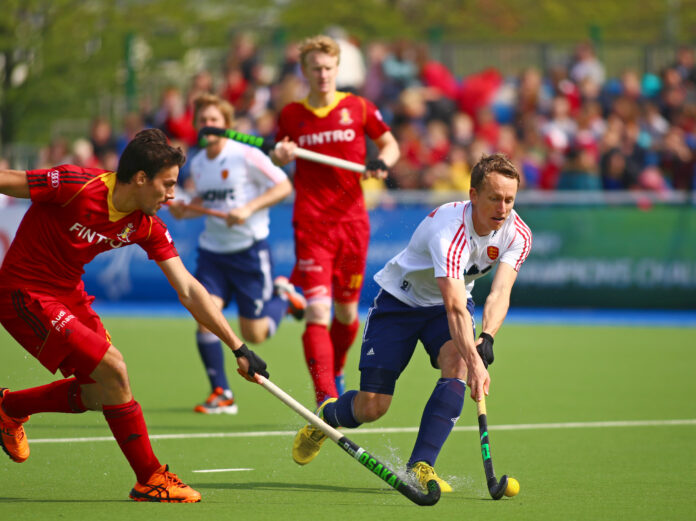 Scotland and England both lost their third pool games in the Four Nations in Glasgow to set up a final day re-match between the old rivals.

England played a strong game only to be edged out by Belgium 2-1 while Scotland leaked goals late to allow Argentina the 5-2 win that meant England finished behind the second-placed Argentines on goal difference.

Belgium, with a 100 per cent record in the tournament, will play Argentina in Tuesday’s final at 9am. England will play Scotland at 11am – both games will be streamed live via YouTube. Check @pushhockeymag for the links.

England coach Bobby Crutchley said: “I was very pleased with our display against one of the teams who have been tipped to win the World Cup. We coped well against a high calibre Belgian team, but we must learn to capitalise on good possession and take our chances. The defeat is disappointing, but we’ve taken another step on the road to the World Cup.”

Ashley Jackson, Barry Middleton and Nick Catlin caused regular trouble for the Belgian side throughout the first half but the game remained goal-less until a mistake from Iain Lewers conceded a penalty corner. While the ball was initially cleared, it was crossed back into the circle to an unmarked Felix Denayer, who smashed it home to give Belgium a 1-0 lead.

Phil Roper leveled the game with his first England goal. After a good approach by England down the right, an unmarked Roper got the ball just off the back line in the Belgian circle and fired a shot across the goal which took a deflection off a Belgian defender to level the game at 1-1 with just ten minutes left on the clock.

In the final ten minutes the game could have gone either way, but a setback for England saw them reduced to ten men after Michael Hoare picked up a yellow card. Belgium were able to exploit the advantage given by an extra man and in the 65th minute Cedric Charlier picked up the ball after a scramble in front of the goal and found the target to give his side a 2-1 victory.

Scotland struggled to maintain their performance levels against a skilful and disciplined Argentina side. The hosts started well with Kenny Bain converting a corner in the 27th minute of a half when both keppers made fine saves.

Gonzalo Peillat leveled from a corner in th e31st minute before the game’s turnig point late in teh half. Scotland were hit by a sucker punch when a speculative, loopy hit into the circle was turned home by Lucas Vila right at the death.

Scotland coach Derek Forsyth said: “There were some things that went well during today’s game, but equally there were some aspects that weren’t so good. When things don’t go well for you, you get punished and when they did go well for us, we didn’t take advantage of the opportunities.

“Despite the results, it’s been a fantastic tournament that we may have liked to have slightly further down the line in our programme. But because of selection dates for the Commonwealth Games it wasn’t going to be possible. I’d like to have had more preparation time with the players.”