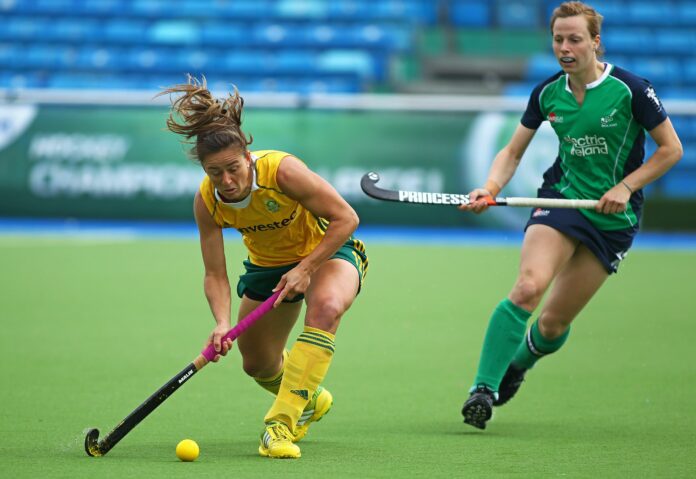 World number 15 Ireland and the 11th ranked South Africa drew their opening Champions Challenge pool B hockey match 2-2 in Glasgow on Sunday after the South Africans were 1-0 up at half-time.

Sulette Damons opened the scoring in the 11th minute, Ireland made a superb equaliser through Anna Flanagan in the 44th before Dirkie Chamberlain regained SA’s lead five minutes later (49th) and Audrey O’Flynn went low to the far corner in the 58th for the 2-2 final score.

“We weren’t good enough in the end zone [in both attack and defence] and gave away too many corners in the second half,” said SA head coach Giles Bonnet. “We created enough chances, but you’ve got to put them away if you want to win.

“I was happy with how we played to get the ball there, we had very many scoring chances, but you’ve got to score then, and that’s the difference. It would have made an interesting scoreline but the final finishing was poor today.”

There were numerous turnovers from both sides and Ireland earned the first penalty corner in the fourth minute, SA post player Lenise Marais coolly turning away O’Flynn’s low flick towards the far corner before the South Africans made use of Damons’ extreme pace down the right, but her cross didn’t find a team-mate. Neither team were connecting sufficient passes together but the Irish won their second PC after a turnover in the 10th and keeper Anelle van Deventer saved the shot comfortably.

Then SA simply exploded out of deep defence and Damons was on hand to pop in the rebound off keeper Aleisha McFerran’s pads after Kathleen Taylor’s initial shot, leaving the score 1-0 to the South Africans in the first quarter.

The passes were starting to flow, a Tarryn Bright and captain Marsha Cox combo saw the SA skipper’s through-ball down the middle ending with Damons’ powerful backhand smashing into the post and staying out.

The girls in green and gold made several entries into the strike zone but the Irish defence held firm, while at the other end SA made key recoveries from Ireland’s attacks, Quanita Bobbs, Marais, Lisa Deetlefs and Cox prominent in this department.

On two occasions towards the end of the half SA might have added to the scoreboard as they exploited the right side of the pitch. Six minutes after the changeover Bright’s top pass from the left saw Damons come agonisingly close to notching up her second, and then it was fellow striker Celia Evans’ turn from a right cross.

Nine minutes into the half Ireland equalised in fine fashion when connections between three players culminated in Flanagan’s diving deflection at the far post.

Another five minutes passed in a flash before Chamberlain put SA back in front after accurate combination play instigated from the left. Ireland then won four PCs in rapid succession and it was from the last, 12 minutes from the end that Flynn ensured the match would finish with honours even.

Winning two PCs in the last 10 minutes, SA pressed hard for the winner, the second set-piece featuring shots from Cox and Damons that were repelled, before another slick combination play resulted in Chamberlain bringing out a great save from replacement keeper Emma Gray.

Soon after, Bright might have also nailed the winner but it was not to be.

“They did not have many goalshots, but we must finish, and that’s it,” Bonnet added.

SA meet world number 10 the USA on Monday. The world’s 14th-ranked Spain, the other pool B country, lost 3-1 to the USA in Sunday’s early match.