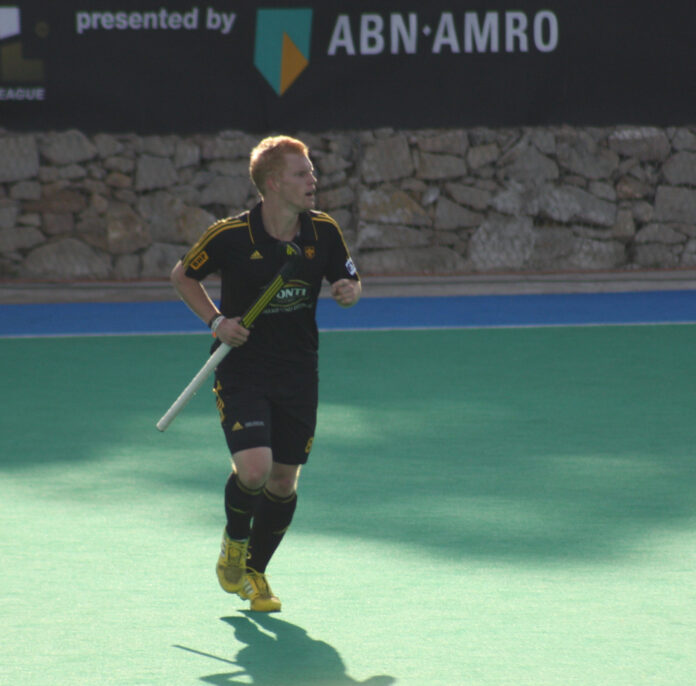 To celebrate THC Harvestehuder making the semi-finals of the EHL, here is an interview their English full-back Richie Dawson-Smith did with Push in February. Don’t forget we are a print magazine – you can subscribe at www.pushhockey.co.uk/subscribe.

What do you do when you miss out on national selection? Dust yourself down, set yourself some priorities and go to …. Germany?

The notoriously tough Bundesliga might not seem the most obvious choice for a young player trying to build a career. After all the few Englishmen to have made a mark there have already established their international credentials. But former England U21 international Richie Dawson-Smith reckons he has made the right choice, and he has now joined an exclusive list of English players who have broken into top-flight hockey in Germany.

Barry Middleton at Club an der Alster in 2010-11 and GB Olympic gold medallist Russell Garcia with THC Harvestehuder 1998-2000 both won national titles with their clubs, and with Dawson-Smith’s at a resurgent Harvestehuder – third in the table at the winter break – come May he could be inscribing his name alongside those elite players.

There is top company too at the THC Harvestehuder club, conveniently based near the centre of Hamburg. Alongside Dawson-Smith on the team-sheet are world player of the year, and double Olympic gold medallist, Germany’s Tobias Hauke and the equally impressive Austrian star Benjamin Stanzl.

“If Bennie had been playing for another country he would be known all over the world,” says Dawson-Smith. “It is incredible how good he is. In training I generally try and put myself up against him or Toby.

“You learn so much about hockey from Toby. You can ask him about anything. He will help you and he will expect you to do certain things in games as well.

“He just keeps pushing you along and having someone with that experience in your team and watching what he does on the pitch is incredible.

“There aren’t many people you could play with that have that depth of knowledge and experience.”

Alongside those training sessions, it is the quality of the German league that Dawson-Smith says is honing his game. “I am feeling a lot of confidence from playing week-in week-out at such a high level against some of the best players in the world,” he says. “Every time I play I will be up against at least one Olympian. The quality of the guys you play against is probably higher in general than in England.”

The relentless Bundesliga format is also a lesson in itself. “You have to be at your best, or as close as you can be to your best, week-in week- out,” says the 23-year-old defender. “With two matches a weekend it really does test you. You can play really well on Saturday but if you don’t repeat that on the Sunday – the Saturday performance doesn’t mean much.

“The ability to reproduce quality is really important and that is the big thing I have taken from the league The players have the ability to just play and play and do the same things over and over again. That’s coming into my game as well. Playing at such a high level, every match, has taught me a lot.”

On the tactical side, Dawson-Smith echoes what others, including Middleton, have said about the Bundesliga – the defensive effort is relentless. “It is man-to-man the whole time,” Dawson-Smith says. “You stick with your man the whole way, and if you get beaten by him it’s your fault. If you are not doing your job someone will tell you!

“The expectations are high. Especially with the standard of players in our side and the way the team has evolved over the past few years.

Ball retention is of paramount importance. “They emphasise patience,” he says. “So it’s about building a goal. So don’t hit the ball into the circle too early – just move the ball around and that gap will come. And when you have created that gap, if you miss it, then the coach will probably get a bit angry at you.”

That coach is Christoph Bechmann, a German international striker who played in three Olympic Games and won a bronze medal in Athens, 2004. And there is quite a bit of shouting, by all accounts. “He shouts a lot,” admits Dawson-Smith – chalking up some of that to a straightforward German attitude to communication, plus an expectation of high standards. “He just expects a lot from you, and it is good to be put in the same group as the players who he has high expectations of.

“There is no beating about the bush which is good,” says the 2009 junior World Cup player. “If you played well you get told you played well. If you didn’t play well you will get told what you need to do better.” Although on-field expectations are high, Dawson-Smith says the amount of training the squad does is less than he was used to at Loughborough in particular.

In Germany the emphasis is very much on match-day performance and keeping the players fresh. “We don’t train as much as people think,” he says. “We will typically train on the pitch Tuesday and Thursday and go for team runs Monday and Wednesday. We are expected to do some stuff in the gym maybe once a week. I will be in the gym once or twice a week myself and I’ll get on the pitch another few times.

“It is all quite sub-maximal – because it is two games a weekend it is relaxed during the week. Some weeks we will only train once because the coach is worried some of the older guys will get bored because the season is long if you including indoor. Towards the end we were only training on the pitch Thursday nights.”

Training is convenient for Dawson-Smith who shares a club flat close to the ground with a team mate. He also coaches and the club have found him part-time work. “I have picked up a little German,” he says. “But luckily they all speak English and when and will speak to you in English, even if you are trying to speak a little German.”

Dawson-Smith returned to England for the indoor season with Bowdon but headed back to Germany ahead of the second-half of the outdoor season. And it was through Bowdon that the German connection was made. Stephan Platz played for the Manchester club as an overseas player when Dawson-Smith broke into the first team as a 16-year-old. It was Platz, now Bechmann’s assistant at Harvestehuder, who broached the idea of a move when the pair ran into each other last indoor season.

As well as the remainder of the Bundesliga programme to look forward to, and possibly the finals in May, Dawson- Smith has the Euro Hockey League knockout stages at Easter. Harvestehuder have drawn German rivals Uhlenhorst Mülheim in the KO16 stage. If they get through that one, Club de Campo de Madrid or Saint Germain (Paris) await them in the quarters. (Harvestehuder have now won their KO16 and quarter-final games).

“Mülheim have not had a great season and we have beaten them both times we have played them,” he says. “We will go in confidently but it is a knockout. If we could get through those first two games, being in that final weekend would be incredible.”

After the German season, Dawson- Smith will weigh up his options. He still has aspirations to push on for the GB selection which he missed out on at the start of 2013. “I was massively disappointed,” he recalls. “Some of my best friends like Henry Weir Dave Condon and Andy Bull – they are the sort of guys I’ve played with since I was quite young and trained with every day. It has been tough to see them go to where I want to be and not be there. But I’m still young enough, there is plenty of time, I just have to keep my head down and keep playing.

“I still have aspirations to get into the GB squad – which was one of my reasons for going to Germany. I will be playing from March until the finals are in May. Then I will sit down and talk with the people I need to talk to and see where I am sitting.

“I had a few injuries last year and didn’t have a great winter – that could be a reason [for missing selection]. Being away and having a full season playing this year could make the difference. I still feel disappointed and I still feel I could make it to that level. I am just hoping what I am doing now is going to get me there.”

While back in the UK, Dawson-Smith has been working on his German in preparation for his return to Hamburg. But if his international dreams are eventually realised, it could be the Bundesliga that has taught him the most important German lessons of all.