Australia pull away to win hockey test against New Zealand 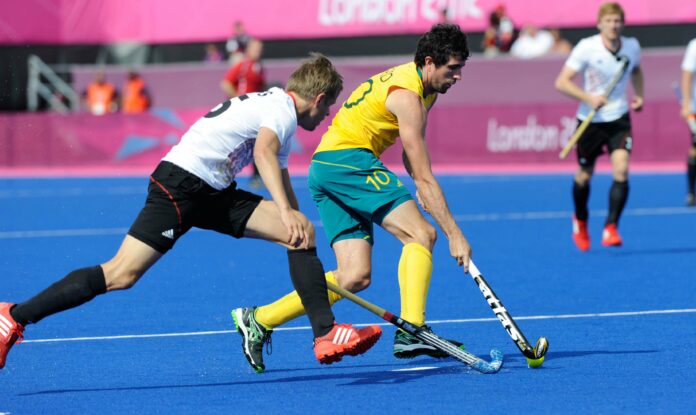 For a full replay  of the game see http://www.youtube.com/watch?v=GAJyknsI1y0&feature=share​

The late brace from Whetton followed first half goals from New South Wales’ Orchard, whose terrific solo effort just before half time gave the Kookaburras valuable breathing space at 2-0.

Whetton’s first was a tomahawk strike from the narrowest of angles after rounding the Kiwi goalkeeper Hamish McGregor while his second was a simple finish at the back post after excellent set-up play by Russell Ford on his 150th appearance.

Kookaburras coach Ric Charlesworth said: “It was a tough encounter and a pretty competitive one. New Zealand are on their way to the Champions Challenge in Malaysia and have what I think is their strongest team here. There was a spell at the start of the second half when we were quite dominant but we didn’t put them away.”

Despite a dominant opening spell, the Kookaburras came close to falling behind early on when goalkeeper Andrew Charter had to look smart to save in front of his goalmouth. Having survived the scare, the Kookaburras’ attacking strength came to the fore minutes later as Rob Hammond found Simon Orchard on the cut-back and Orchard fired home through the legs of the goalkeeper Devon Manchester.

The Kookaburras’ advantage was doubled on the stroke of half time through Orchard’s second as he latched on to Whetton’s redirection of Joel Carroll’s long pass. Rounding the goalkeeper, the 27 year old from Maitland still had plenty to do as he withstood last ditch challenges to flick the ball home.

Trent Mitton, Whetton, Orchard and Hammond all had opportunities to extend the Australian lead early in the second half but the visitors halved the deficit with just under 20 minutes remaining. Experienced Black Sticks man Shea McAleese finished off a flowing passing move to pull the score back to 2-1.

With 10 minutes remaining and New Zealand pushing for an equaliser a lightning quick Kookaburras break was finished emphatically by Queenslander Whetton to put the result beyond doubt. Three minutes later Whetton had his second – the Kookaburras’ fourth – after Russell Ford’s pass across goal found him with pinpoint accuracy leaving Whetton with a simple finish for his 23rd international goal.

The Kookaburras and New Zealand Black Sticks meet again in the second and final Test in Perth on Saturday evening, 7pm AWST / 9pm AEST/ 12noon UK. The match will be live streamed via the Hockey Australia website at hockey.org.au.