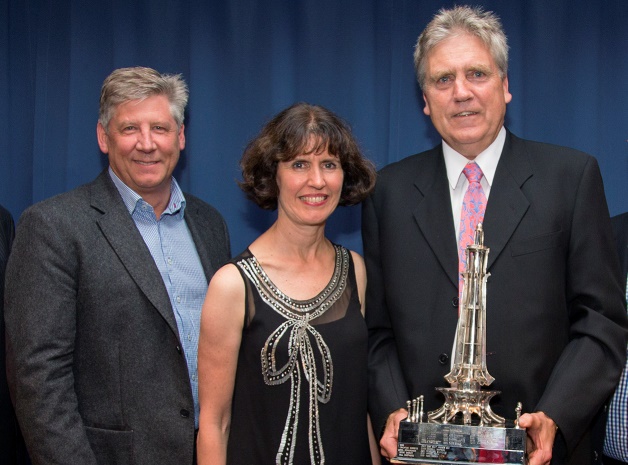 Hugh was awarded the Pakistan Trophy for outstanding contribution to the administration of hockey around the Oceania Cup in Stratford late last year.

His incredible vision, leadership, dedication, and professional expertise ensured the successful delivery of a world class facility funded, engineered and delivered within five months which enabled Taranaki to host the Oceania Cup.

The Pakistan Trophy is not awarded every year, but it was agreed by the Hockey New Zealand Board that Hugh was a very deserving recipient.

Hugh was nominated for the award by the Taranaki Hockey Association.

“He is always contactable and approachable and now having been administratively involved for many years is an important source of information. When it comes to matters regarding facilities he will always have it under control and know what to do to ensure the best outcome.”

To top off the night, Hugh also received a Bronze Service award for between 15-19 years of service to the sport of hockey.

Awards were also given for other Bronze Service recipients along with Gold Service awards for 25 years of more service to hockey.

Hockey New Zealand chief executive Malcolm Harris spoke at the dinner about the high caliber of volunteers and administrators in the sport.

“Sport in New Zealand wouldn’t happen without passionate, dedicated people who go above and beyond to ensure sport is delivered to those in our communities.

“Having been in the role only a few months, I am heartened by the wonderful attitude and sincerity of the hockey community.”

There were no Silver Service award recipients in 2013