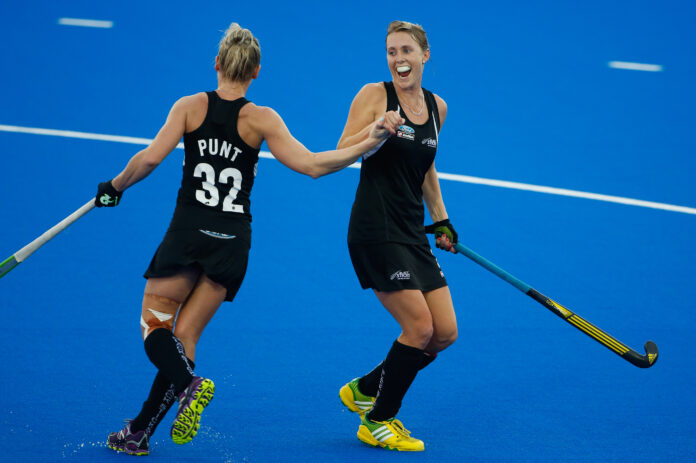 “It was a very frustrating result, it was a close game and we certainly had opportunities to win,” said New Zealand coach Mark Hager.

“We now need to look ahead to China, our focus will be on connecting well in the attacking third and making sure we are clinical in taking the opportunities that we create.”

A crowd of approximately 3,000 packed into the Unison Hockey Stadium, Hastings to see the key match between the trans-Tasman rivals.

As torrential rain poured down – on what was an otherwise sunny Hawke’s Bay day – the Black Sticks were unphased and scored in the third minute through Sian Fremaux.

The game was fiercely competitive, full of all the action and intensity that is to be expected when these two sides meet. The Australian’s showed their class with Georgia Nanscawen, Brooke Peris and then Jane Claxton all scoring in the first half.

Two minutes before half time and much to the delight of the crowd, Anita Punt kept the Black Sticks in the game by nailing a trademark drag-flick and taking the score to 2-3.

In the second half, the Black Sticks stepped it up and were persistent in attack and pushed forward at every opportunity.  There were several moments when the Kiwis were one-on-one with the keeper and had every chance to score but just couldn’t finish it off, much to the disappointment of the very vocal crowd.

Australia booked their spot in the final when Jodie Schulz scored from a penalty corner with eight minutes remaining. The Kiwis worked hard in the dying minutes but the three goal shortfall was too much to come back from.

It was a momentous game for Central’s Emily Naylor, playing her 239th test and surpassing Suzie Muirhead as New Zealand’s most capped female player of all time. A presentation post match was made to Naylor by Suzie Muirhead who has been playing in the Affiliates Hockey Tournament held at Hawke’s Bay Hockey Association.

“A very fast and aggressive game, both teams have a very attacking style of play, it was very physical,” said Naylor.

“Overall, it was a frustrating game for us though. In the second half we created lots of goal scoring opportunities but it was just not our day, we just couldn’t finish them off.”

In earlier matches, there was little separating seventh ranked China and eighth ranked Korea.  Both teams spent lengthy spells in each other’s goals but failed to convert the pressure into any points in the first half. Not long into the second half, Korea’s Darae Kim finally broke the points drought, scoring a field goal in the 39th minute.  The final score, 1-0 to Korea.

The next game saw top point scorers for the tournament Argentina face bottom ranked Japan. It only took nine minutes for Delfina Merino to deflect a Luciana Aymar strike at goal, into the net propelling them to 1-0.  Argentina struck again just before halftime with a Carla Rebecchi converted penalty corner.

For the duration of the second half it appeared as though Argentina was simply going through the motions, before Martina Cavallero finished off a slick period of attacking play, the final score was 3-0.

The schedule for tomorrow’s final day at the Unison Hockey Stadium is as follows: