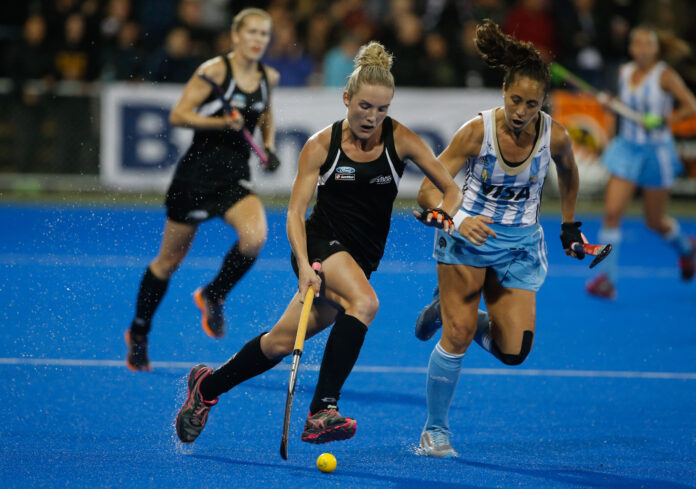 Argentina’s women’s hockey side defied a New Zealand comeback to win 3-2, scoring with three minutes to go in today’s test match at the Hawke’s Bay Festival.

All locked at 2-2 with the clock ticking down, both sides scrambled and dived for the winning goal and it was Carla Rebecchi who found the net and gave her side their third win of the tournament.

In what was a great display of hockey from both sides, the Black Sticks worked hard in the second half to pull back a 2-0 deficit after Rebecchi and captain Luciana Aymar got the visitors ahead.

The performance from the Black Sticks improved as the game went on – the Kiwis marked players well, turned over a lot of ball and created some great opportunities. Their commitment paid off when Anita Punt scored her third goal of the tournament and captain Kayla Whitelock added a second it ten minutes later.

A new trophy for clashes between the Black Sticks Women and Las Leonas is now on the line every time the two teams compete. The idea for the silverware, named the Amistad Friendship Cup, was conceived by Argentinian Ambassador Fernando Escalona and was presented to the captains of the two teams at a special function in Napier yesterday.

Extremely wet conditions today made play difficult, at one point delaying the match due to heavy rain.  At halftime the score was locked at 1-1, but the tempo was soon raised when Korea struck early in the second half with a goal to Kim Darae.

Japan quickly responded with a set move off a penalty corner however it wasn’t enough to stave off a late Korean assault, with Cheon Seul finding the net in the dying minutes taking the score to 3-2.

The second match of the day saw Australia face a rejuvenated Chinese side who were fresh off a win over the Black Sticks on Sunday.

However China’s confidence was short-lived as 4th ranked Australia asserted their dominance early, with goals to Georgia Nanscawen and substitute Mathilda Carmichael.

In the second half Australia consolidated their lead with a strong attack in the final quarter seeing Kellie White score twice.  The final score, 4-0.