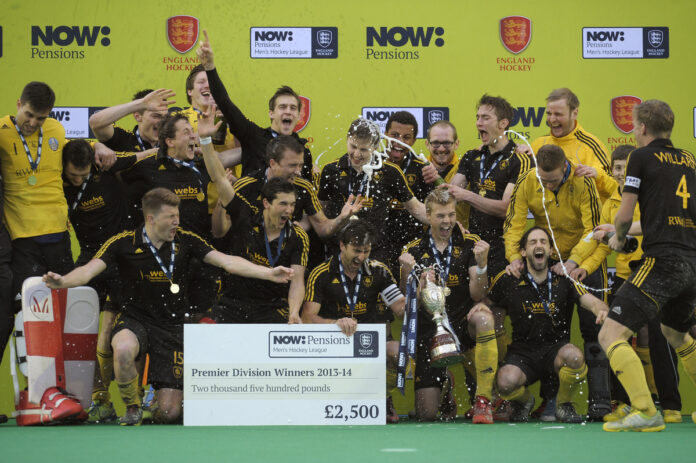 As well as the title and the £2,500 winner’s cheque, the Nottingham club will also take top seeding into next season’s Euro Hockey League.

If England retain their third slot in the EHL, that will go to Surbiton, who defeated hosts Reading, also on a shootout after a 1-1 draw. Reading will now not be in Europe in 2014-15 after 18 consecutive seasons of continental competition.

The final produced some high-quality hockey with excellent defending and fine goalkeeping from Beeston’s George Pinner and East Grinstead’s Richard Potton responsible for the low scoring, rather than any lack of enterprise from the top two sides in England this season.

Beeston took the lead in the fifth minute of the game with a powerful corner drag-flick from Sam Ward. Andy Piper, in acres of space at the top right of the Beeston circle, drove home hard on the reverse to level in the 12th minute.

In the shootout, Beeston’s Ben Arnold’ spin-and-stuff move decided the championship 3-1 on his side’s fourth shootout attempt. Pinner’s tackles on Ashley Jackson and Niall Stott and delaying tactics on Mark Pearn had set up a winning position with only Mark Gleghorne netting for East Grinstead – again with the classic spin and stuff.

Potton produced a sprawling save to turn Harry Martin’s goal-ward flick over the bar to keep the score at 0-0 on Beeston’s first shuttle. But cool finishes from Adam Dixon and Sam Ward gave Arnold the chance to win the game.

In the third-place playoff, Reading took the lead in the third minute when Jonty Clarke smashed in a rebound. That was equalised by Alan Forsyth, from the penalty spot in the 23rd minute after Matt Daly was fouled when about to shoot on a penalty corner variation.

In the shootout, Michael Watt, Alan Forsyth and Chris Grassick all converted for Surbiton, while England duo Nick Catlin and Tom Carson found the target for Reading. With Surbiton 3-2 up, Jonty Clarke stepped up to take Reading’s fifth and final penalty knowing he needed to score, but David Kettle’s stick denied the two-time Olympian.

In the relegation/promotion playoff, Brooklands MU will return to the premier division after securing second-place in the round-robin competition with a 3-1 win over Southgate, who had already secured premier division status for the 2014-15 season. That result turned the following Cardiff & Met vs Sheffield Hallam game into a battle for pride. Cardiff won 5-2 in a card-strewn encounter.