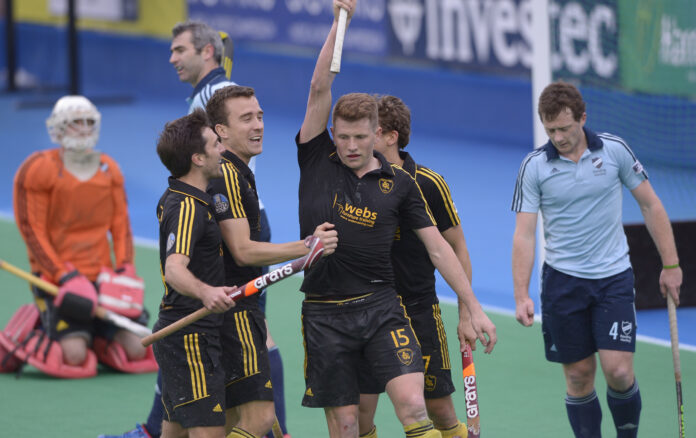 Beeston also join regular-season table-toppers East Grinstead in Europe, although the winner of the final will take the higher seeding into the 2014-15 Euro Hockey League competition.

A third EHL place could be available to the winner of Sunday’s third-fourth play-off game between Surbiton and hosts Reading – although that will depend on the European club rankings to be recalculated at the end of this EHL season.

In the second semi, Reading failed to fire in front of their own crowd, suffering a 4-2 defeat at the hands of defending champions Beeston, setting up a final between the top-two sides in the home-and-away season. Beeston’s Sam Ward and Adam Dixon picked up a corner and an open-play goal each. Late strikes from Dan Shingles and a Jonty Clarke stroke made the score respectable.

In the relegation/promotion play-offs, Southgate will be in the premier division next season after their second win in the round-robin format – a 3-0 defeat of Sheffield Hallam. Goals came from two Rick Gay  strokes and a Callum Burden open-play goal.

Winless Cardiff & Met are destined for another season in the west conference after a 2-1 loss to Brooklands MU. The Manchester side took the lead in the 22nd minute through David Flanagan. Cardiff equalised in their first attack from the restart with a fine individual dribble and shot from the baseline by Luke Hawker. A 62-minute tip–in corner goal from Aidan Khares decided the game in Brooklands’ favour.

The final place in the premier division will go to either Brooklands MU or Sheffield Hallam. A win or draw for  Brooklands tomorrow against Southgate assures them of promotion. To retain their premier division status, Sheffield have to hope Brooklands lose and that they can turn-around what is currently a four-goal goal difference deficit with a win over Cardiff.