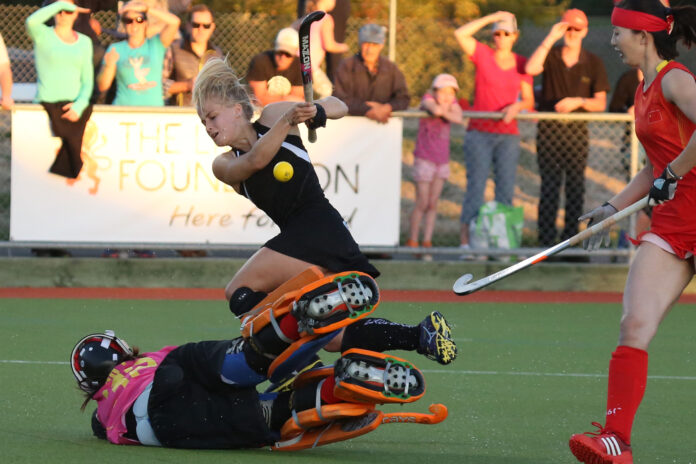 New Zealand women have mounted a come from behind charge to defeat China 3-2 at the Taupo Hockey Centre on Monday.

Down by one goal at halftime, the Black Sticks played a strong second half  of hockey with two brilliant goals from Sophie Cocks and Jordan Grant sealing the result for the Kiwis.

Head coach Mark Hager said the final result was pleasing but that there was still plenty to work on going into game two at 6pm tomorrow night.

“It was a pretty poor first half, our basic skills weren’t where we needed them to be,” Hager said.

“The second half was a lot better and we saw the result of pressure and got a lot of intercepts which flowed on to our attacking game.

“Our players love to run and we did that well in the second half, so we need to let them do that and continue putting pressure on the opposition.”

The Black Sticks dominated the opening minutes of the game, but allowed China to score a field goal against the run of play through Jiaojiao De.

Emily Naylor tied the game at 1-1 with a terrific reaction to knock in a deflection off the goalkeeper from Rhiannon Dennison’s penalty corner flick.

China scored a penalty corner of their own just minutes later to go into halftime leading 2-1.

New Zealand looked a different side after the break and looked dangerous with every possession on the ball.

Cocks’ goal was a stunner, smashing home a deflection from a penalty corner before Grant delivered the game winner with a powerful hit from the top of the circle just minutes later.

Northland’s Stacey Michelsen played limited minutes in her first game back in almost a year following a serious knee injury.

The Black Sticks are back in action against China at 6pm tomorrow night, the game will be streamed live at www.hockeynz.co.nz

Taupo’s two test matches are important preparation for the Hawke’s Bay Festival of Hockey from April 5-13 which will see the Black Sticks take on Australia, Argentina, Korea, Japan and China.