Australia make it a clean sweep against Japan 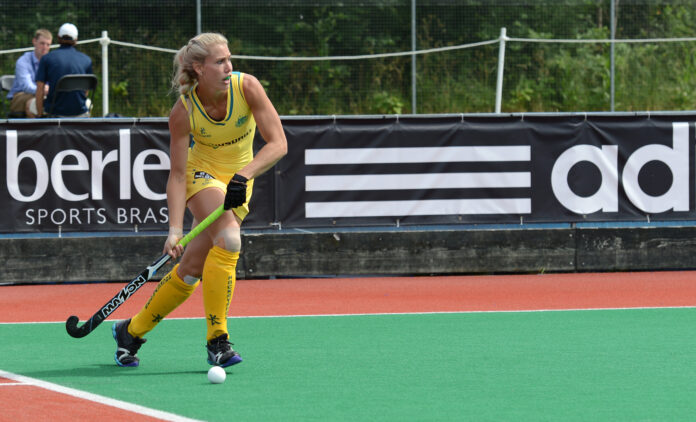 Wrapping up a busy past week the Hockeyroos marched into their fifth and final match of the Test series against Japan winning 5-2 on home turf in Perth.

Georgia Nanscawen broke the ice three minutes into the first half with a field goal giving Australia a quick 1-0 lead over Japan.

Australian captain, Madonna Blyth and Brooke Peris kicked into gear giving the Hockeyroos breathing space after the pair scored at the 18th and 29th minute mark. Japan’s striker, Shiho Otsuka pulled Japan back into contention at the 32nd minute with 4-1 half time.

After a tentative start to the second half Japan came back blazing 11 minutes in. Akika Ota scored Japan’s first penalty corner of the match leaving the hockeyroos still in danger with only two goals in front of their visitors.

Midway through the second half the Hockeyroos earned its final goal to seal their fifth consecutive win by Ashleigh Nelson who brought Australia’s victory to 5-2 over Japan.

Speaking after the match Hockeyroos head coach Adam Commens said, “It was a really promising first half, we had efficient goal scoring which lead us to 4-0 up and 4-1 coming into the break which was really pleasing”

“The second half became a little inconsistent in which we passed too many opportunities to Japan however, once again we held control of the game and it was a solid effort.”

Discussing Jodie Schulz’s 50th International goal for Australia which was conceived off the back of a penalty corner in the 14th minute Commens noted, “Jodie is one of the most dangerous drag flickers in the world and it’s a great achievement for her to reach 50 international goals for the Hockeyroos while it’s also pleasing to see the other four field goals come out on top as well.”

Commenting on the Hockeyroos preparation coming into the six nations tournament held in New Zealand next week Commens added, “We are still trying to work out our best combinations as we head into the World Cup. New Zealand will give us a good chance to develop our game and experiment with players and positions, ultimately it will give our team balance and preparation before extending our tour in Europe.”

The Hockeyroos maintained their 100% win record against Japan over the course of the Western Australian five Test series. The team will now head to Hawkes Bay, New Zealand to play in the six nation’s tournament April 5 – 13 where the Hockeyroos will face Argentina day one of the tournament 12:00 pm AEDT (9:00 am AWST).