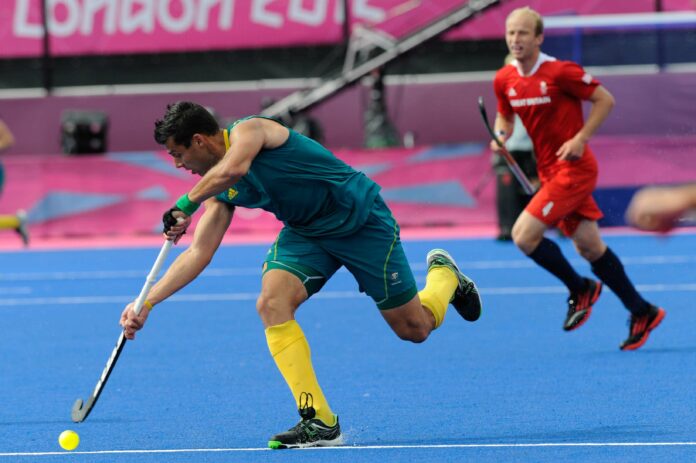 Played at a frenetic tempo in front of a capacity partisan crowd, the match burst into life in the sixth minute when Victorian Ciriello powered home the game’s first penalty corner. Tasmanian Eddie Ockenden doubled the Kookaburras’ advantage shortly afterwards and by midway through the first half Australia were three goals up, Ciriello having netted his second.

Goals either side of half time saw Malaysia fight their way back into contention as first Shahril Saabah and then, somewhat controversially, Rashid Baharom got the 12,000 strong crowd on its feet. Baharom’s goal was initially disallowed but after consultation between the two umpires was eventually awarded.

No sooner, however, had Malaysia got to within one goal than the Kookaburras responded. Ciriello completed his hat-trick with his 75th international strike, extending the Kookaburras’ lead to 4-2. And just four minutes later, Nick Budgeon maintained his impressive record of scoring in every Australian match in the competition firing home low into the goal for 5-2. It was his eighth of the tournament and ensured he walked away with the award for top goal scorer.

As the match entered its final stages the Kookaburras’ piled on yet more pressure. Ciriello bagged a fourth penalty corner goal with Matt Gohdes and Tristan White adding to the Australian tally either side of Fitri Saari’s late strike. It was Gohdes’ 25th international goal and White’s second.

Afterwards, Kookaburras coach Ric Charlesworth said, “We played pretty well today, we were solid all the way through. I felt that we controlled the game despite a period in the second half when it got pretty tense. Their first goal came against the run of play and their second was a bit controversial.”

Charlesworth himself played in the inaugural edition of the prestigious invitational tournament back in 1983, the first time Australia lifted the trophy. Explaining his motivation to return each year he said, “You only have to look at tonight. Tonight we played in a full stadium with so much noise you couldn’t hear one another. It’s good practice for the World Cup.”

With the World Cup in The Hague now 69 days away Charlesworth said there is still plenty of opportunity for athletes to book their place on the plane to Europe, adding, “We’ve got a dozen or so players at home who are still very much in contention. We’ve got seven weeks of hard training and it’s very competitive for places.”

The Kookaburras will face New Zealand’s Black Sticks in two Test matches in Perth on April 17 and 19. The matches will form the final stage of selection to the World Cup squad, which will be announced at the end of April.

In other games Korea beat China 3-2 for bronze and Canada defeated South Africa 2-0 for fifth place.