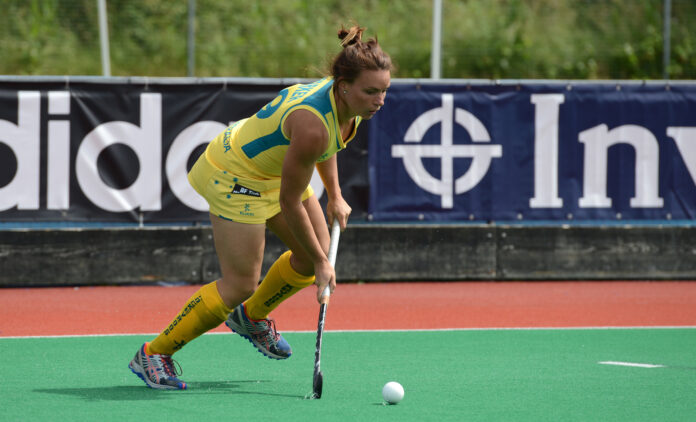 Two strikes each from South Australian Georgie Parker and Emily Smith from New South Wales set the Hockeyroos on course to a commanding 6-1 victory over Japan in the first match of their five game series on Friday evening.

Victorian Georgia Nanscawen and Parker’s fellow South Australian Jane Claxton also got in on the act in Kalgoorlie, Western Australia, where the team will play the opening two games of the series thanks to the support of the WA Government Department of Sport and Recreation and the team’s major partner, Ausdrill.

Despite a bright start by the Australian women the Hockeyroos were forced to respond after falling 1-0 behind to Yukari Mano’s straight strike in the 12th minute. Parker’s leveller eight minutes later was one to savour for her hometown of Berri as the 24 year old forward combined with Berri-born teammate Karri McMahon to convert from close range.

No sooner were Australia level than Emily Smith had them in front. Remarkably, the home town connections paid off again for the Hockeyroos as the diminutive forward was teed up by her Crookwell compatriot Kellie White before sweeping the ball home.  And on the stroke of half time Smith extended the lead to 3-1, nipping in behind to knock the ball over the goal line after Parker’s shot had looped up over the Japanese goalkeeper.

A series of three penalty corners in quick succession paid dividends for the Hockeyroos early in the second half. From the third set piece Georgia Nanscawen deflected McMahon’s powerful low flick into the bottom corner to extend Australia’s lead.

With 15 minutes remaining Jane Claxton scored arguably the goal of the game, unleashing a terrific tomahawk into the far side of the net after breaking into the circle. Moments later, Parker’s second, Australia’s sixth, showed the bravery required of a forward as she put herself in the firing line to deflect Ashleigh Nelson’s pacey pass into the roof of the goal.

Afterwards, Head Coach Adam Commens was pleased with how his side performed as they look to finesse an exciting brand of hockey. He said, “Japan were probably a little tired coming off their long trip but I thought we were really sharp, we executed our game plan well. There were certain things that we can do better and we can improve on but I was pleased in the team’s attempt to execute the game plan and the way that we finished our opportunities in both the first and second halves.

“The level of team play tonight was impressive and there was a high level of skill as well. It’s an area that the Hockeyroos have really improved on in the last few years and they’re starting to play a really exciting brand of hockey. Tonight we saw some of that play with the goals that we scored.”

Looking ahead to round two on Saturday night, Commens explained, “We’ll look to continue to improve our style of play. Every game you go over some tweaks and adjustments you want to make and I’m sure Japan will have a different style of play or different philosophy when they come out against us. So, it’s a challenge for us to see what they’re doing and adapt and try to find the solution to the way they defend and also the solution to defend their attacking play.”

Brooke Peris sat out the match with a slight ankle niggle.

The Hockeyroos meet Japan in the second match of the series at 6:30pm AWST / 9:30pm AEDT Saturday evening in Kalgoorlie, WA.