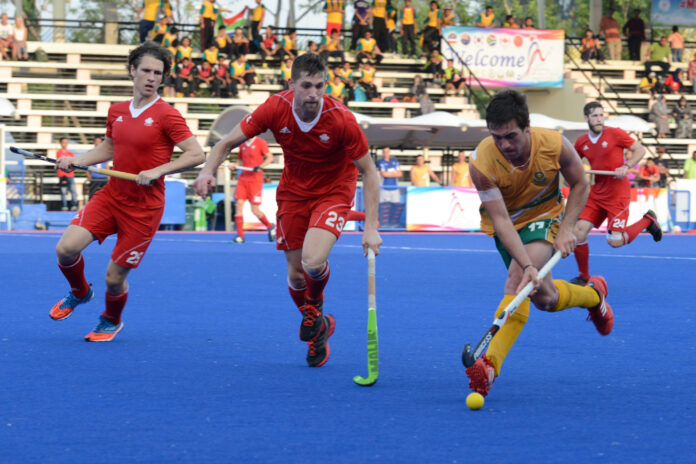 After three rounds both sides were desperate for victory, even if only to get the psychological advantage ahead of what is likely to be the playoff for fifth place on Sunday.

In the third minute a diagonal aerial ball from Rhett Halkett – in the SA side for the first time due to club commitments in The Netherlands – found left midfielder Taylor Dart, who got in a backhand shot.

Soon after, Halkett made a crucial tackle following a turnover but in the 12th Canada won the first penalty corner after keeper Rassie Pieterse had made a save from Sukhpal Panesar’s snap shot and Tupper aimed his PC flick low to open the scoring.

Canada made two goal-threatening entries into the strike zone thereafter, while SA were struggling to string a telling sequence of passes together, but in the 27th SA came out of defence with a neat move between four players down the left that eventually found an unmarked Drummond, who picked his spot past Canadian goalkeeper Antoni Kindler for the equaliser.

The goal seemed to galvanise SA and in the 33rd an intelligent interchange of passes between strikers Hykes and Player of the Match Lungi Tsolekile saw the latter shovel the ball over the goalline for the lads in green and gold’s 2-1 half-time lead.

Going into the second half SA continued to transfer the ball intelligently and captain Wade Paton’s effort was saved following a PC variation, but in the 48th Canada got their second goal from set-piece play when Matthew Guest followed up the rebound and volleyed into the net.

At 2-2 with 20 minutes left, the match was evenly poised and SA missed a great chance when the determined Paton fed Hykes, whose well-placed cross went tantalising across an empty goal with no one to latch on to it. Tsolekile got in a shot soon after and umpire Zhinan Tao of China awarded a PC, yet the Canadian defence held firm.

But SA had the last laugh when striker Pierre de Voux showed the presence of mind to be patient before passing to Hykes for his fellow frontman to score three minutes from time (67th).

On the final hooter Australian umpire Ben de Young awarded Canada a PC – and with the whole team on the edge of the strike zone it was a dramatic moment that South Africa managed to survive for a much-needed 3-2 victory.

The match will be televised live on SuperSport, as will all three playoff matches on Sunday.