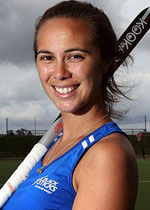 Jordan Grant has earned a promotion into the 2014 New Zealand women’s squad.

The 22-year-old made her debut at the Black Sticks’ three nations tournament against USA and Great Britain in San Diego last month and impressed the coaches.

Black Sticks head coach Mark Hager said they have been keeping an eye on Jordan for some time, and she has proven she has what it takes to perform at the top level.

“Jordan has been on our radar for the past few years. She had a great NHL (Ford National Hockey League) and worked very hard over summer on her fitness,” Hager said.

“With all our injuries to key players over the past six months, we gave her a chance on the USA tour and she showed us she deserves to be there.

“Her versatility is a huge bonus for us going forward in that she can help us in many different positions. She’s got speed and strength and in terms of physicality she doesn’t take any backward steps.”

Jordan has been promoted from the Development Squad and adds to the now 27-strong National Squad.